New signs are Welcome to Thame 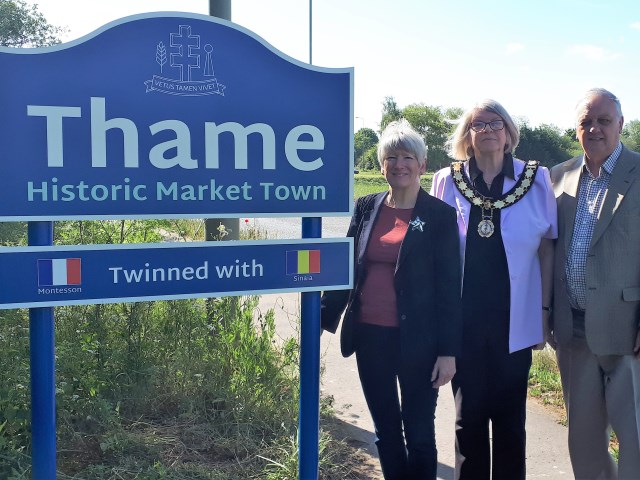 Visitors to Thame will be receiving a colourful welcome to Thame following the installation of updated signs at each of its newly located Gateways. The previous signs were reaching the end of their life span, but alongside this, there were several other factors that motivated the change.

Celebrating our Twin Town
The project was initiated by Cllr David Bretherton, pictured here with Thame’s new mayor Cllr Ann Midwinter and Cllr Helena Fickling (another member of the working group involved in the project, which also included Cllr Linda Emery and Becky Reid, Market Town Coordinator). Cllr Bretherton was keen to ensure that Sinaia, Thame’s Twin town in Romania, was represented on our Gateway signs alongside the already featured Montesson. The new sign design, with a separate panel for Twin Towns, will ensure that any future twinning is added with ease.

Including all our new estates
Thame has seen a lot of new homes being built over the past few years. The new developments on Thame Park Road demanded a relocation of current signs to ensure that the estate entrances fell within these boundary locations. The relocation of signs along Aylesbury road, also means that visitors to Lea Park coming from this direction pass a Thame sign prior to entering the estate. A new sign will be installed on the Phoenix Trail to ensure that walkers and cyclists visiting the town receive the same, warm welcome – something previously overlooked.

Linking to our Town Flag and new branding
In 2017 Thame Town Council ran a competition for the creation of a new town flag, and the new Gateway signs reflect the colours contained in this new Town Flag, the colours also used within Thame Town Council’s branding.  During a process of re-branding the Town Council also modernized the historic town crest in its logo and this has also been included in the new signs. For more information about the flag and crest, and the symbols they contain visit
https://www.thametowncouncil.gov.uk/2017/05/11/town-flag-winner-chosen/

Putting Thame on the map
With previous sign locations, commuters travelling past Thame from Aylesbury to Oxford could have no idea about the beautiful, historic market town that lies behind a fairly uninspiring ring-road. However the new location of the Gateway signs means that everyone travelling past will know they have arrived at Thame, and that it is a Historic Market Town. The hope is that it will encourage them to come in and visit the town, bringing more footfall to our beautiful town, and support the local economy.

The existing boundary signs have colourful planters located under them (although some have been removed for various reasons over the years).  These planters are also used as locations to advertise local events.  Not all of the new Gateway sign locations are able to accommodate a planter.  This means that a separate project will need to be undertaken in due course to establish the need for alternative planters and potential new locations.

So it is out with the old and in with the new, but don’t worry – if you miss our old signs, one will be making its way to Thame Museum as a memory of a Thame gone by. A visit will allow you to the opportunity, not only to see the old signs, but also to have a look at some of the other old memorabilia that celebrates Thame through the time. http://www.thamemuseum.org