Thame is one of the most frequently used filming locations for the popular ITV series, Midsomer Murders. The town regularly features, either as Causton, or as any one of the many villages in the fictional Midsomer County. The series is still going strong in its 25th anniversary year 2022 with regular screenings, not only in the UK, but all over the world.  Many Thame landmarks have been featured in different episodes over this time, including Thame Town Hall, the Market House, Rumsey’s Chocolaterie, the historic Swan Hotel and Spread Eagle Hotel, the Black Horse Pub & Brasserie, together with many other locations.

Fans of the detective series can pick up a free Midsomer Murders leaflet from the Town Hall Information Centre or Thame Museum (during opening hours – check the Thame Museum website) and discover all of the deadly locations around the town. Lovers of DCI Barnaby can also have their photograph taken outside of Causton Town Hall. Pop in to the Town Hall Information Centre to pick up the ‘Causton’ sign to feature in your photo. Here you can also purchase a wide variety of Midsomer Murder themed books and gifts.

To ensure that visitors to Thame (aka Causton) have as enjoyable an experience as possible, 21st Century Thame has organised regular Midsomer Tours which are led by specially trained Midsomer tour guides. They take place weekly between April and October on Wednesdays at 2.00pm.  Each tour starts outside Thame Town Hall, one of the filming locations and takes in all the varied locations in the town centre. A maximum of 15 persons can be accommodated on each guided Midsomer Walking Tour. See How to book a tour below for important booking information.

My friend and I are on the train back to London so I thought I’d take the opportunity to drop you an email to let you know how much we loved the tour. It was really interesting how it mixes real history with facts about the show, and what a beautiful town! Alan was a wonderful guide – very warm and considerate, and of course brimming with knowledge. The photo opportunity outside Causton Town Hall at the end was a particularly lovely touch. I will definitely be recommending it to any Midsomer Murders fans I know.

How to book a tour

The tours start at Thame Town Hall every Wednesday at 2.00pm and last around 75 minutes. Tickets are £10.00 per person and may be purchased online at www.thamemidsomertours.com/ or in person or by phone at the Town Hall Information Centre. A maximum of 15 people can be accommodated per tour.

If you have any questions, please contact Tony Long at thamemidsomertours@gmail.com or call 07881 688895.

We look forward to seeing you on a Midsomer Walking Tour! 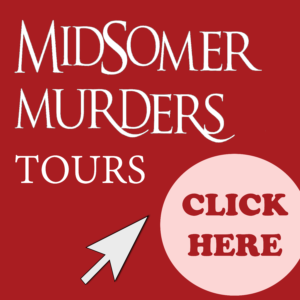 Thank you and we look forward to seeing you on a Midsomer Tour!

Read about the charities supported by Midsomer Murder Walking Tours. 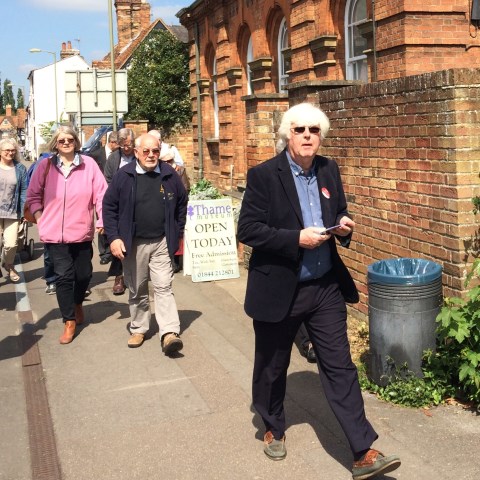 Spend a unique Sunday afternoon taking a Midsomer Walking Tour (commencing at 2 pm in Thame) and combine it with Cream Tea in the afternoon tea car on the 4.30 pm steam departure from Chinnor & Princes Risborough Railway. All at our special joint ticket price of £25 per adult.

Please note that the combined tour with Chinnor & Princes Risborough Railway is not being held at present. Please check this page or visit the Railway’s website for updates.

The Making of Midsomer:

An Exhibition at Thame Museum

Midsomer Murders, the popular ITV series, celebrates 25 years in 2022. Thame is one of the most filmed locations in the fictional Midsomer County. This exhibition will feature many of the 23 Thame venues used as filming locations in the series, as well as some of the locations in nearby villages.

Visitors to the exhibition will learn about –

There will also be –

An unmissable exhibition for all Midsomer fans!

If you would like to attend as a larger group then please pre-book by emailing the museum on info@thamemuseum.org to arrange this.

By arrangement, a 75-minute guided walking tour of Thame can be arranged, if Wednesday is not convenient. Tickets are £10.00 per person, but please note a minimum charge of £40 applies.

To arrange, please contact Tony Long at thamemidsomertours@gmail.com or call 07881 688895.