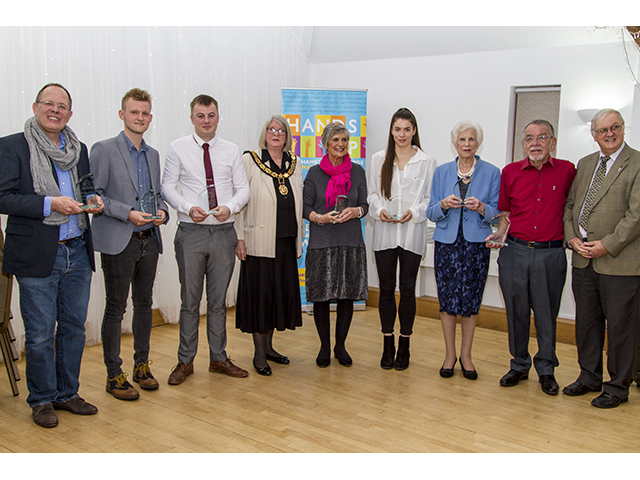 On Thursday 14 March, the eleventh Thame Town Awards took place at The Barns Centre. The Mayor of Thame, Cllr Ann Midwinter welcomed this year’s winners and their guests, members of the Town Awards panel, councillors and Town Council staff. Individuals who nominated the winners were also invited to attend the awards ceremony and the Mayor thanked everyone who had made a nomination this year. The panel had a difficult time deciding the six winners from so many outstanding nominations.

Before the Town Awards were presented, the Mayor invited the members of the Thame Remembers Project steering group to give a presentation on their extensive efforts in marking the centenary of World War One in Thame. The Mayor then presented the group with the Mayor’s Special Award in recognition of their efforts.

Sporting Achievement award – Alice Hopkins
The first award of the evening went to Alice Hopkins; a former Barley Hill pupil who is now attaining outstanding sporting achievements at a national level. She recently made her debut representing Great Britain in the pentathlon, where she achieved several personal bests and contributed to the team winning gold. She is also first in the UK and 6th in Europe for the Under-23 long jump. She was described as quiet and unassuming, but with determination to go the whole way.

Volunteer of the Year award – Jesse Smith
Jesse is the lead organiser of the ever-growing and popular Thame Tractor Run; an event which has helped bring the local farming community together while raising thousands of pounds for local charities and causes. Over 230 vehicles, many festively decorated, took part in the second Tractor Run in December which attracted support from the Mayors of Oxford and Thame, local media and hundreds of local residents who came out to line the route and support the event. The two tractor runs have raised over £20,000 for Cancer Research and Thames Valley Air Ambulance. His dedication to help others and constant drive to get things done were described as admirable.

Service with a Smile award – Curtis Wyse
Curtis is a postman in Thame who delivers a professional, helpful and excellent service. His customers described his as the best postman in town! He delivers Thame’s post with a spring in his step, no matter what the weather and is always smiling bringing joy to all he meets. His politeness was described as a credit to young people.

This new category aims to showcase the wonderful businesses we have in our town and the work they are doing to support their employees and the wider community. The 2019 award went to Windles Group; a family-owned and community-focused business who do so much to support Thame from printing lantern templates for the primary schools at Christmas to offering work experience placements for Lord Williams’s School pupils and being an active member of the local business forum. Their purpose built building enables them to be innovative, environmentally friendly and efficient. They place great emphasis on working together and looking after their staff, customers, suppliers and the community of Thame.

Creative Arts Achievement award – Yvonne Maxwell
Yvonne is the lead organiser of the annual Thame Arts and Literature Festival. She was presented with the Creative Arts Achievement for her hard work and dedication to this successful event which is in its tenth year this October. The festival has evolved year-on-year to become a vibrant and wide-ranging event that attracts internationally renowned speaks and a diverse audience to our town each year.

Lifetime Achievement award – Jean Mander
Jean has volunteered with the Thame Society for the Visually Impaired group for over 40 years, where she organises meetings and supports group members in a range of activities. She goes above and beyond in this role by visiting and telephoning those who cannot come to the group to see if they are ok, and provides emotional support with homemade soups and cakes. She has a “can do” attitude and is an active member and leader of several local fundraising groups, community forums and charitable activities.

The Mayor congratulated all of the winners and encouraged everyone to make a nomination in the 2020 awards. Guests then enjoyed a buffet and photographs.