A 2 mile walk of approximately 1 hour exploring the Victorian and Edwardian area, east of the Town Centre. Start and finish at the Memorial Gardens.

Thame (or Tame) originated as a Saxon settlement at a crossing of the River Thame and is mentioned in the Domesday Book. After the Norman Conquest it came under the jurisdiction of the Bishop of Lincoln and in the 12th C he founded the “new” market town of Thame away from the river and the church and in the area we now recognise as the town centre.

In Victorian times the town expanded towards the east, encompassing some of the agricultural land amalgamated under the Enclosure Award of 1826. Although now mainly residential, these areas included many of the industrial and religious ventures of the time. The architecture varies from small Victorian cottages to grand Edwardian town houses.

The walk is entirely on footpaths and pavements with good access for prams and wheelchairs. There are steps at Point where the route joins the Phoenix Trail. To avoid this, return along Chinnor Road to rejoin at Point (19)/(20)

A 2 mile walk of approximately 1 hour exploring the Victorian and Edwardian area, east of the Town Centre. 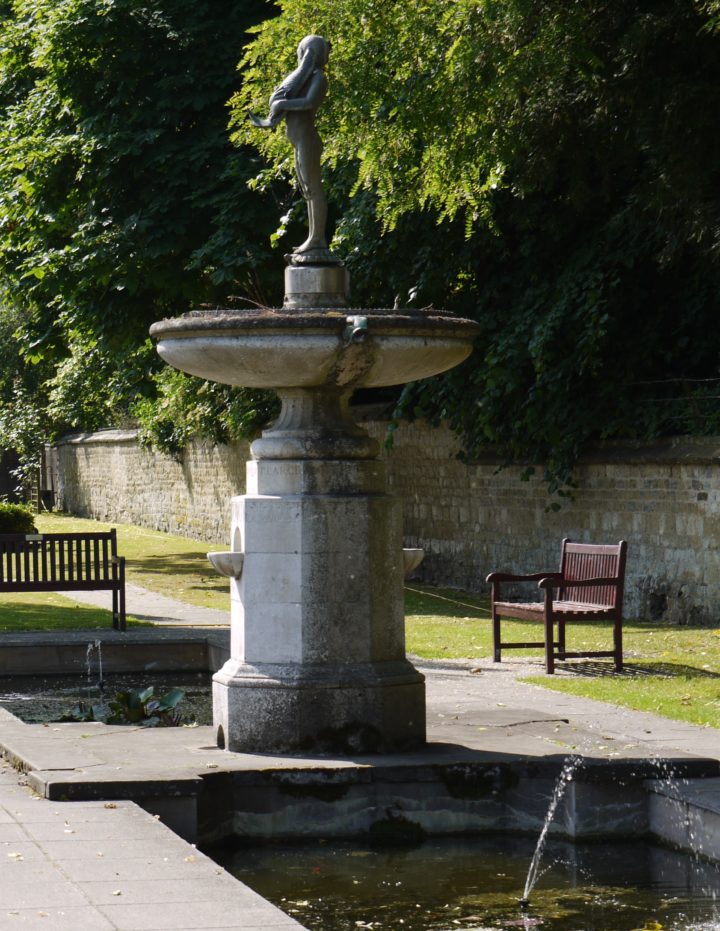 The Memorial Gardens with its fountains and fish ponds is on the site of White Hound Pound where animals used to be held prior to the market. There was also a large pond where animals could drink. The white Portland stone War Memorial was unveiled by Prime Minister David Lloyd George in 1921.

Look across the road

Here there was once an early land enclosure of Thame, White Hound Close, stretching all the way to Wellington Street and across East Street. It was a popular recreation area for the town and one where the Queen’s Men (a travelling Elizabethan troupe) would have played. In 1587 one of the players, William Knell, was killed here in a fight with John Towne and it is reputed that his place in the troupe was taken by a young William Shakespeare. 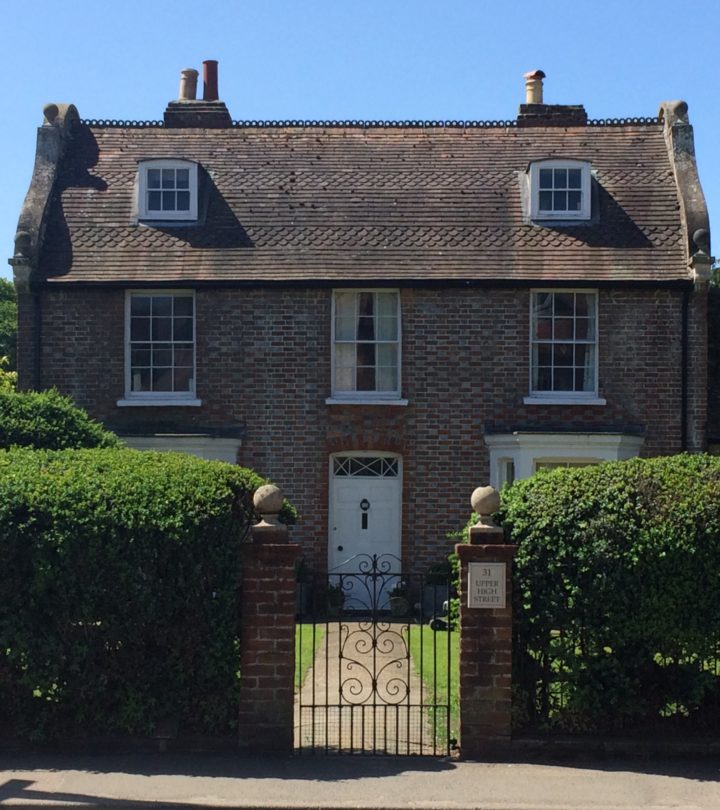 Proceed past “The Poplars”, an attractive house in the Dutch style, into Park Street. A little way along on your right hand side is the Baptist Chapel (now a private house) built in 1865 at a cost of £500 to replace an earlier one at the end of Rooks Lane.

Cross over, return to the roundabout and turn right into East Street.

The Cross Keys has imposed itself on this junction since 1841 when Thomas Burnard was the first licensee. Its architecture typifies the new beer houses that sprang up in the country around that time. The name stems from Christian heraldry and would have suited the religious bigots of the time.

Look across the road from The Cross Keys 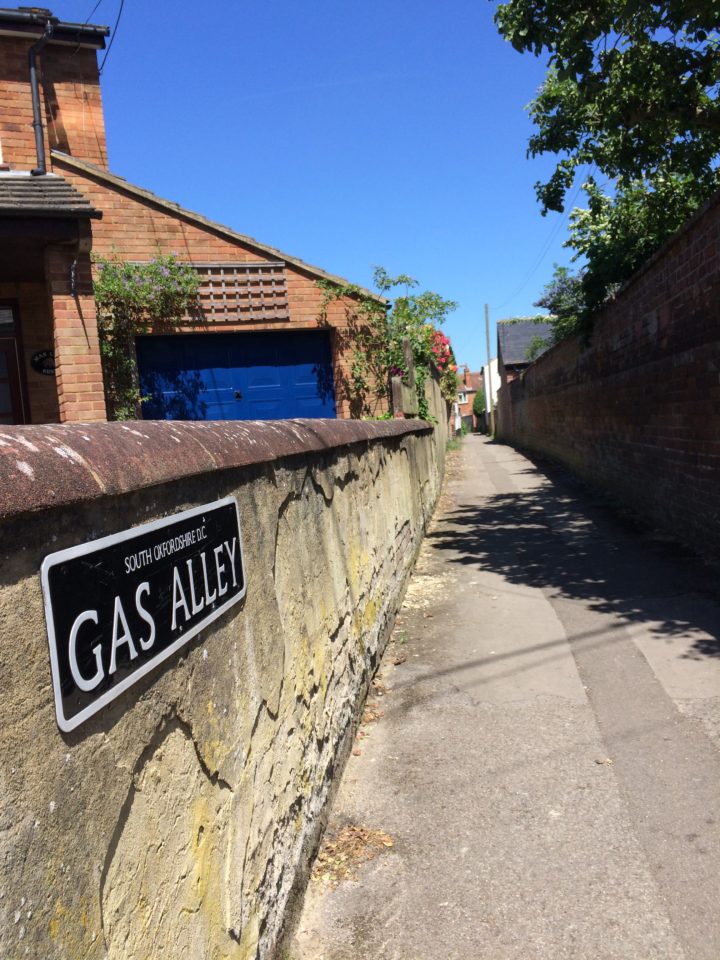 An unusual feature of this area of the town is the use of stone as a building material, probably from the demolition of a larger building. An example of this is The White House opposite built in 1900. The straight wide aspect of East Street shows its origins as the 19th C Thame to Princes Risborough turnpike road. It cut the old White Hound Close in two and provided new development opportunities along its wide margins. The cottages on both sides show early domestic and industrial growth but soon peter out.

The path of Gas Alley on the left dates back before White Hound Close. The name is derived from the town’s gas works (opened in 1851) which were located towards the Wellington Street end

Carry on along East Street 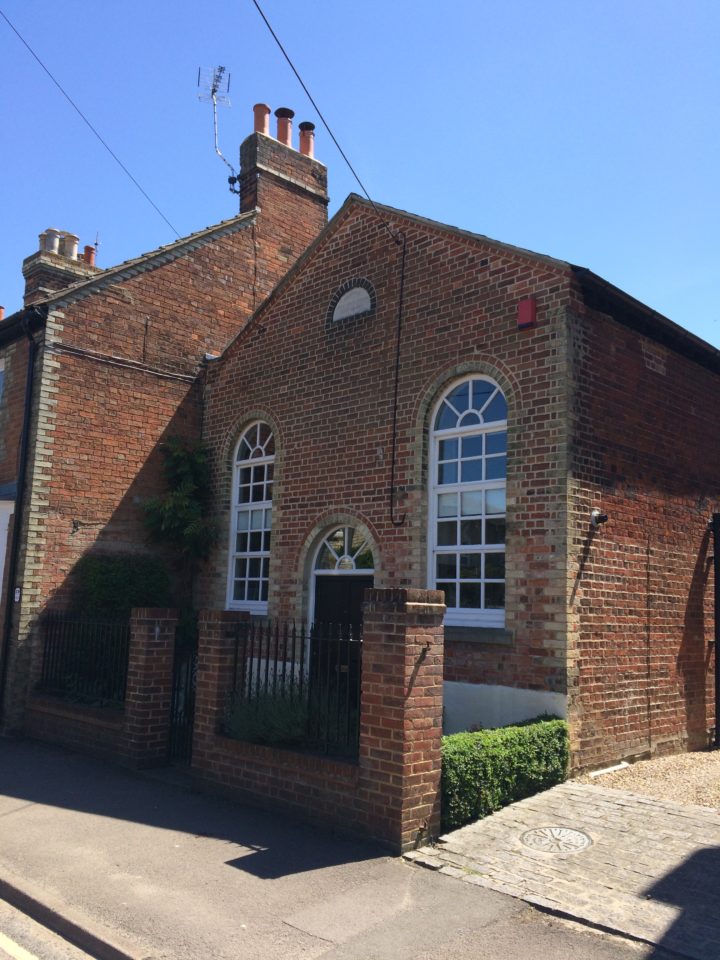 The Chapel on the right was erected by the Primitive Methodists in 1864 (as shown on the foundation stone) but due to amalgamations of religious factions had ceased being used as a chapel by about 1900. It was used as a Church Hall for many years before becoming a private house.

Carry on along East Street

The Victoria Nursing Home was built by Mr Samuel Lacey at his own expense: costing, with equipment, about £700. It was opened by the Countess of Macclesfield in 1897 and presented to the Nursing Association in celebration of the Queen’s Diamond Jubilee. An operating room was added in 1909 and a new wing in 1922. Soon afterwards its name was changed to the more suitable one of “Cottage Hospital”. In 1926 two maternity wards, nurses’ bedrooms and another bathroom were added. It is still in use as a Community Hospital.

Continue to the next junction. 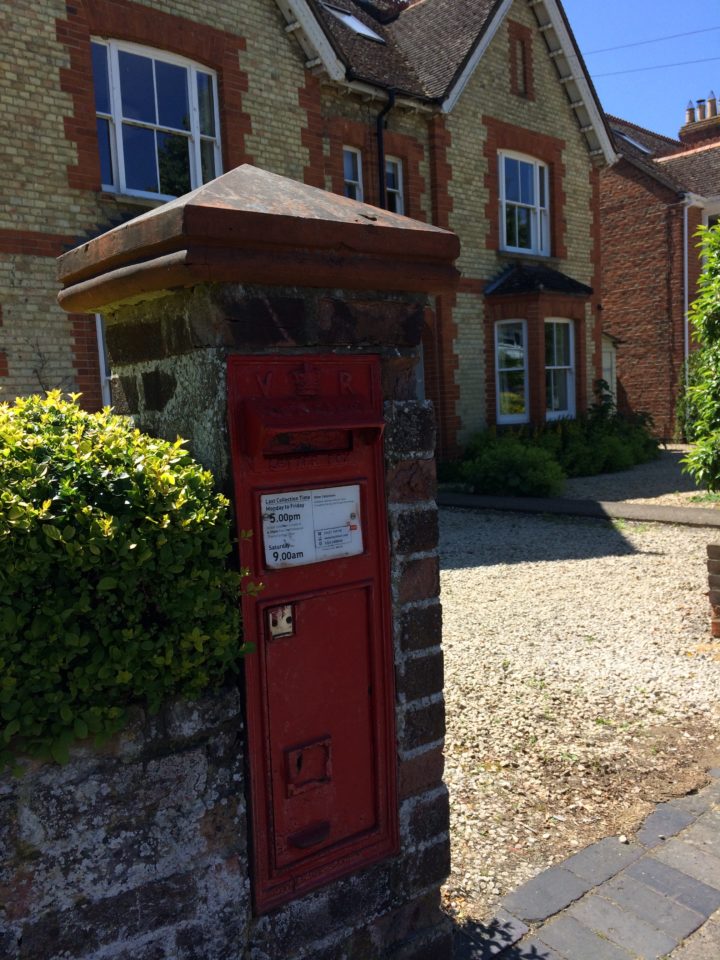 Here the construction of East Street across the earlier street line of Wellington Street and Kings Road is noticeable. The row of cottages on the left was built as Tythrop Terrace in the early 1860s; the restaurant used to be a pub called The Star and Garter (now the Bay of Bengal), reflecting allegiance to the crown and Queen Victoria.

This lovely terrace is made up of Victorian houses. A very early “VR” post box is located in one of the gate posts. 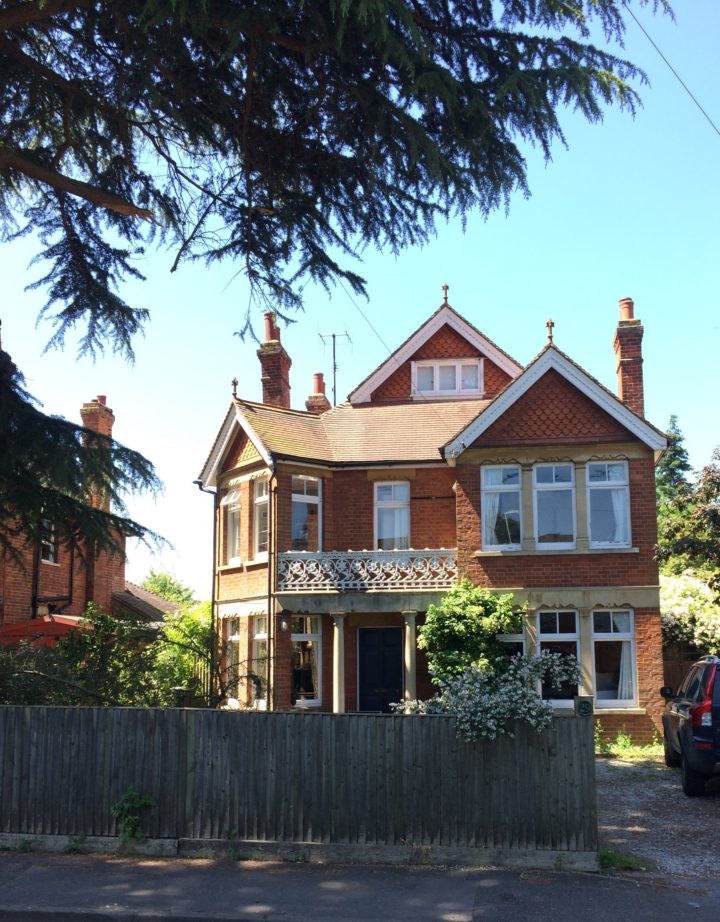 Many Edwardian houses stand out on the right hand side of the road with their decorative ridge tiles and balconies. This is a residential development of the early 20th C with grand houses and large gardens on the sunny side and smaller less imposing ones opposite.

Halfway along Croft Road, by a new development, take the footpath to the left leading through to Queen’s Road and turn right.

Queen’s Road was once the main route out of town to the east, to Towersey, Kingsey and Princes Risborough. The development here is a mixture of Victorian and more recent housing. 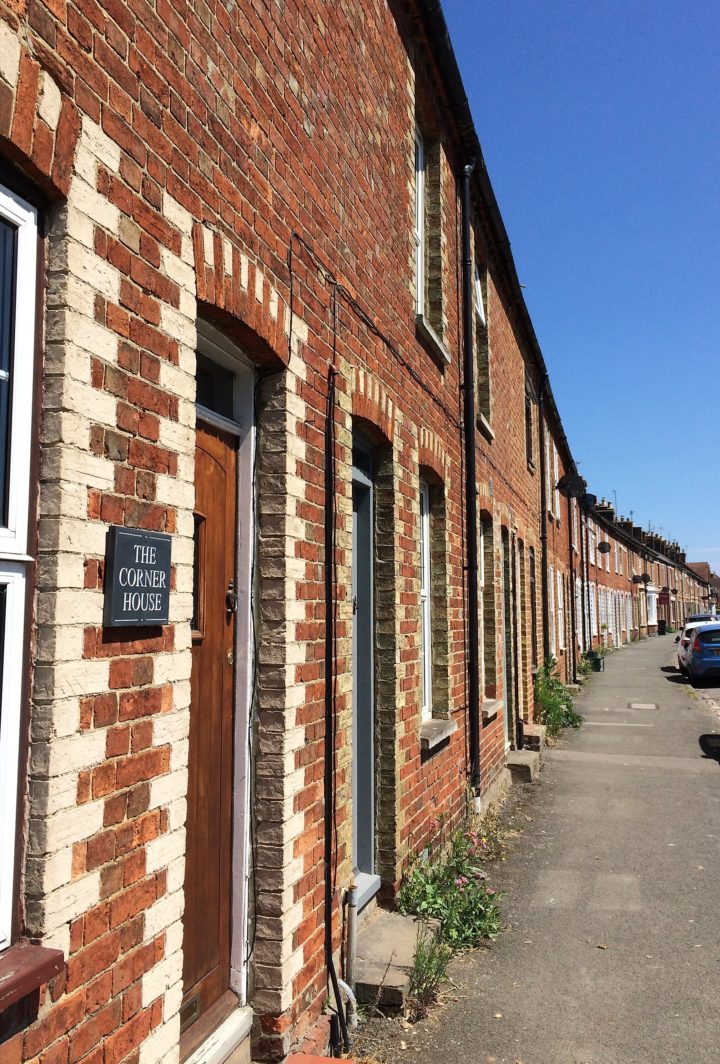 Here, sitting on a curve in the road, the attractive terraces of cottages are typical of the Victorian period. The use of contrasting yellow brick around doors and windows adds to their architectural appeal and the decorated key-stones make interesting features. Although built for the railway workers and the new working class they still represent desirable accommodation today.

The white house at No. 111 provides a break in the terraces. This prestigious house was designed by I K Brunel as the Station Master’s residence. The terraces following with their small front gardens reflect the increased wealth of the later Victorians, although the Turret house is a little overelaborate

Pass in front of the new Phoenix Court, follow the road up the railway bridge and take the path to the left, down steps, to join the Phoenix Trail. 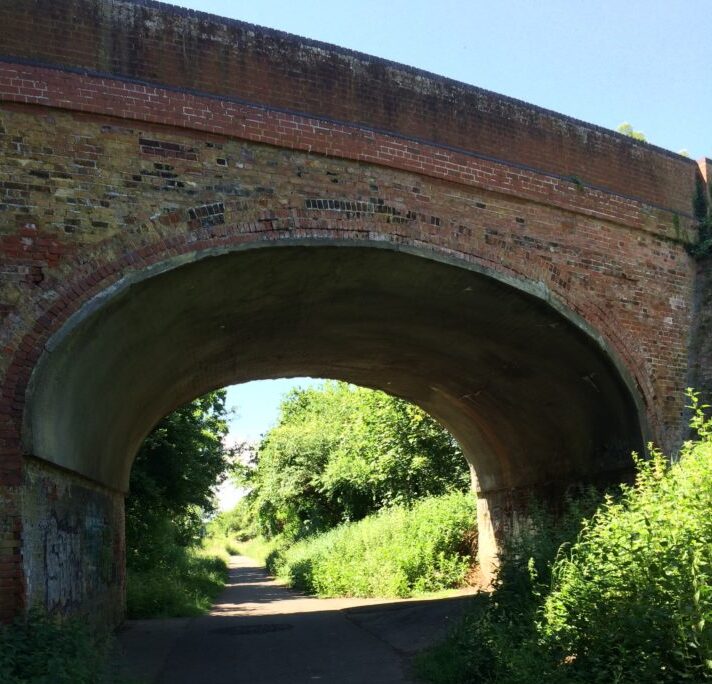 Turn right under the bridge. The Trail follows the old railway line between Thame and Princes Risborough. In 1997 Sustrans secured it as part of Route 57 of the National Cycle Network. It is well used by walkers, joggers and horse riders as well as cyclists. The many artistic and imaginative structures along the Trail were designed and constructed by local Rycotewood College students.

Continue along the old railway line.

This was originally one of Brunel’s broad gauge railways, but in common with the rest of the GWR it became standard gauge in 1871. Passenger services ceased between Princes Risborough, Thame and Oxford in 1963, although freight services continued to Thame until 1991. Sadly the roofed structure of Thame Station and the rest of the buildings have now gone, with just the platforms remaining as raised banks beside the main pathway.

After the next bridge turn right, off the Phoenix Trail, through Chowns Close (named after a former chair of the Council) and at the end, turn left onto Thame Park Road.