A 2 ½ mile walk of approximately 1 ¾ hours exploring the older areas of the town and the nature reserve. The walk is mostly on level pavements with good access for prams and wheelchairs. The pathway at Spring Path slopes slightly but is manageable with care. The paths in the nature reserve may be muddy and unsuitable for wheels. To avoid this use the diversion at Point (6).

Thame (or Tame) originated as a Saxon settlement at a crossing of the River Thame and is mentioned in the Domesday Book. After the Norman Conquest it came under the jurisdiction of the Bishop of Lincoln and in the 12th C he founded the “new” market town of Thame away from the river and the church and in the area we now recognise as the town centre. In 1215 he diverted the road from Aylesbury to Oxford so that it ran through his new town.

In medieval times farm land was distributed in piecemeal plots within the large field system and the farms were located in settlements. The “Enclosure Award” of 1826 changed the style of farming with new farms built away from the towns and villages to take advantage of the consolidated allotments of land. In Priestend and Old Thame many of the medieval farm buildings can still be seen.

This historic trail route explores the area of Priestend and Old Thame taking in the River Thame and Cuttle Brook Nature Reserve.

A 2 ½ mile walk of approximately 1 ¾ hours exploring the older areas of the town and the nature reserve. 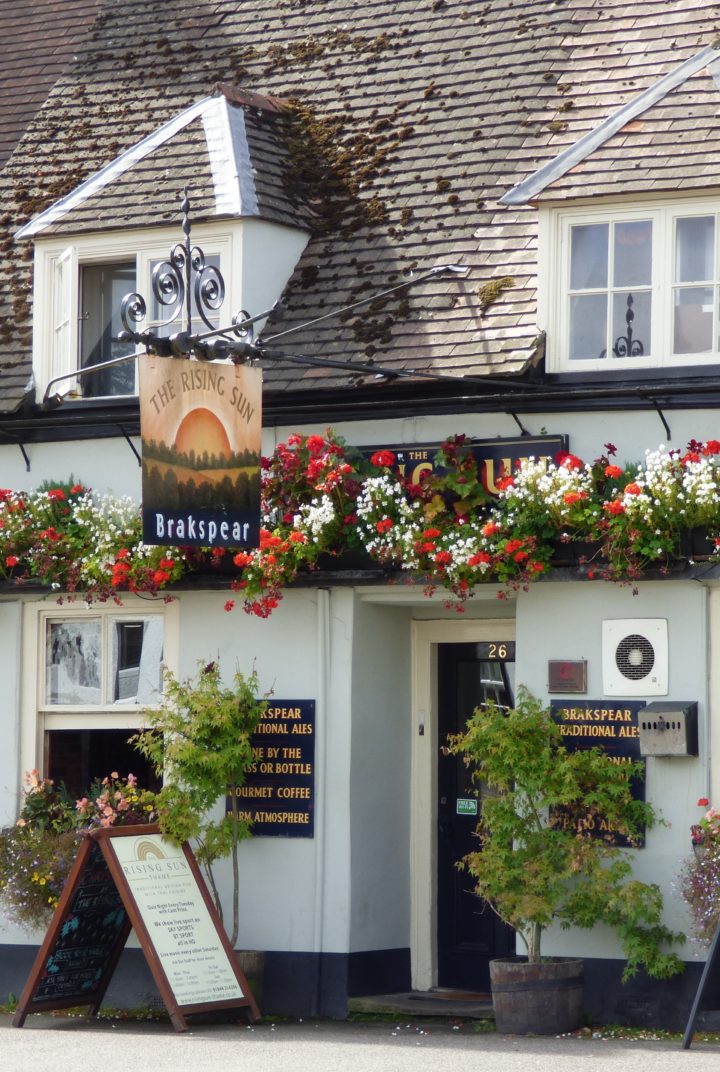 Cross into Southern Road where the Malthouse was once part of the Phoenix brewery complex and the Rising Sun was formed as a beer house from three jettied cottages in 1830. Southern Road forms the rear access to the burgage plots of the High Street, but much has been in-filled such as the row of cottages on the left hand side.

Continue along Southern Road and enter Mitchell Close on your right.

Although now a residential street, here stood the medieval Horse Fair and latterly the first Church of England school, the only remnant of which can be seen in a small section of railing embedded in the large beech tree at the end of the road. 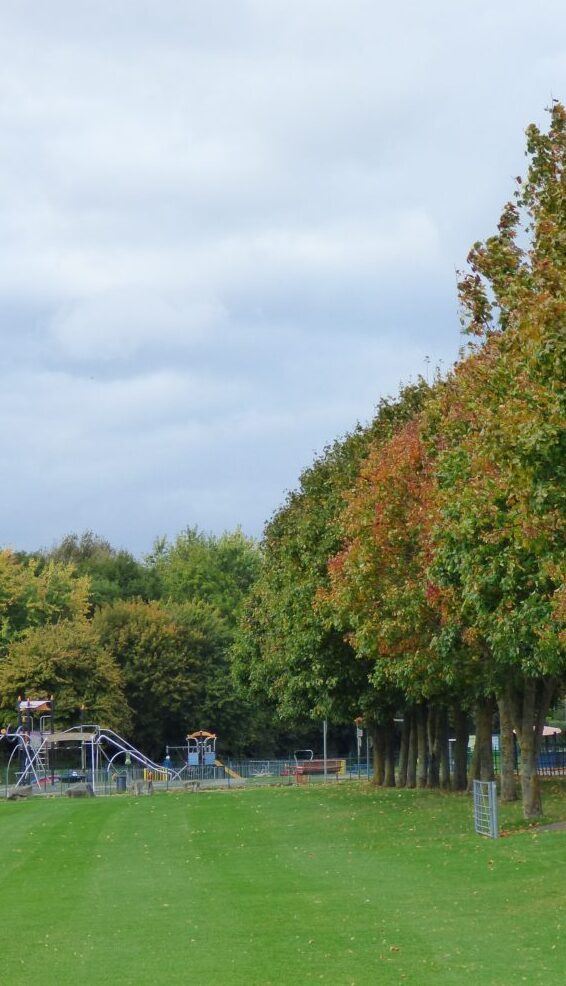 The new St Joseph’s RC Church is immediately in front. The current church replaced a smaller 1920s building in 1997.

Turn left into Brook Lane and at the junction with Spring Path turn left again and soon on your right is the Recreation Ground.

This Recreation ground was given to the town in 1895 by trustees on behalf of the Hon. Francis Bertie.

Return along Spring Path to Brook Lane, and go down the sloping path. 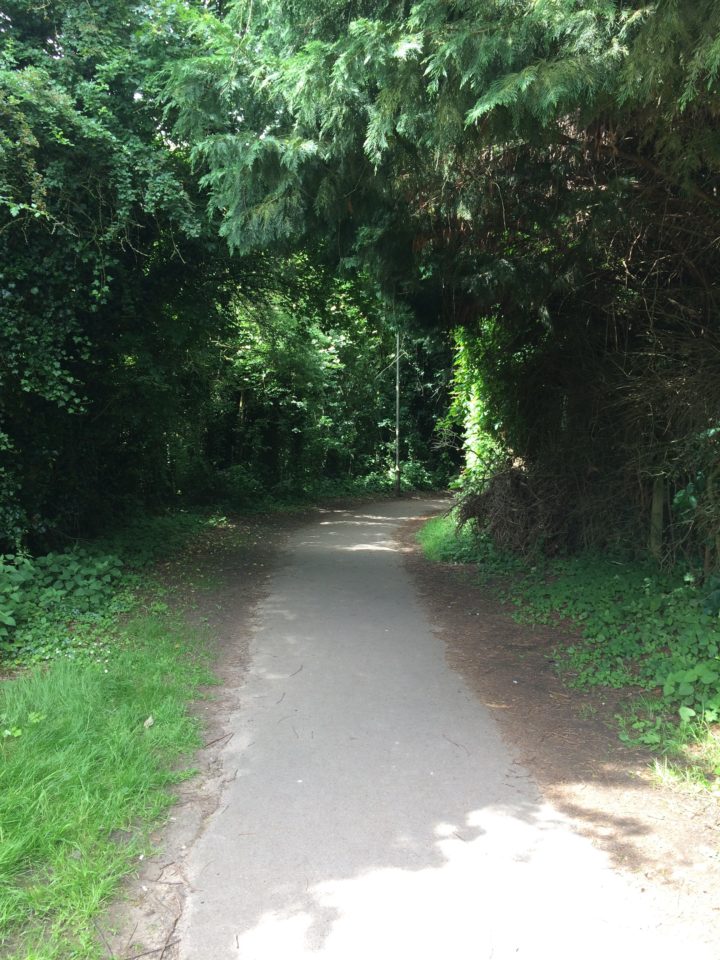 On this path a number of springs can be seen, particularly after heavy rain. The Spring from which the path’s name derives was said to be: “a fine pure spring of high repute for its many virtues” and was known for its particular ability to cure eye complaints. At one time known as Court Well, the name of the brook was corrupted from this into Cuttle. On the left is Cuttle Brook Nature Reserve which was created in 1995.

Before the bridge take the path on the left into the nature reserve. To avoid this, continue ahead and bear right into Beech Road and at the end turn left into Sycamore Drive. After approx. 80 metres turn right onto a footpath (Hackett’s Lane) signposted ‘Moreton’. Then, after approx 150 metres, take the path on the right into the school grounds to re-join at Thame Leisure Centre.

Keep alongside the brook and soon on your left is the Pond which was created in 1996 to give interest and a haven for pond life. There is even a pond dipping platform but please put the creatures back.

Keep walking along the path, following it round to the right. 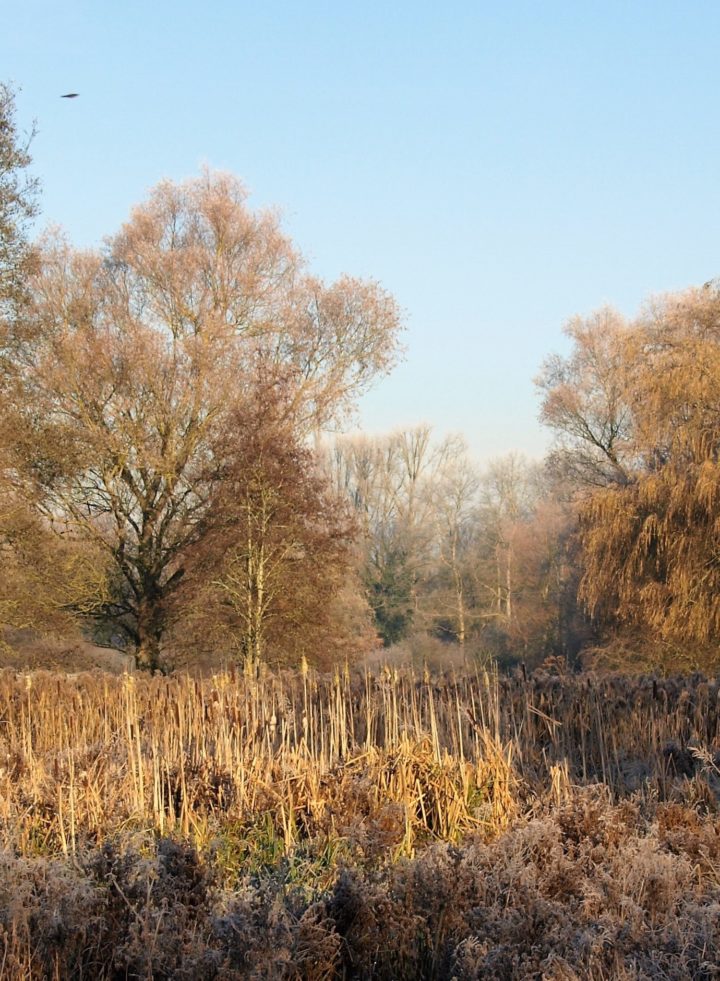 Further on, the path takes you by the sedge beds, where in this fragile environment you may see marsh marigolds or rare birds like the grasshopper warbler.

Cross onto the wooden bridge NOTE: To avoid any steps continue straight on along the path until you reach the Phoenix Trail then turn right. Otherwise, turn left after the bridge.

This bridge was designed by students from the local college. The bridge is popular for Pooh sticks.

Continue through the meadow to the path junction and continue walking straight. 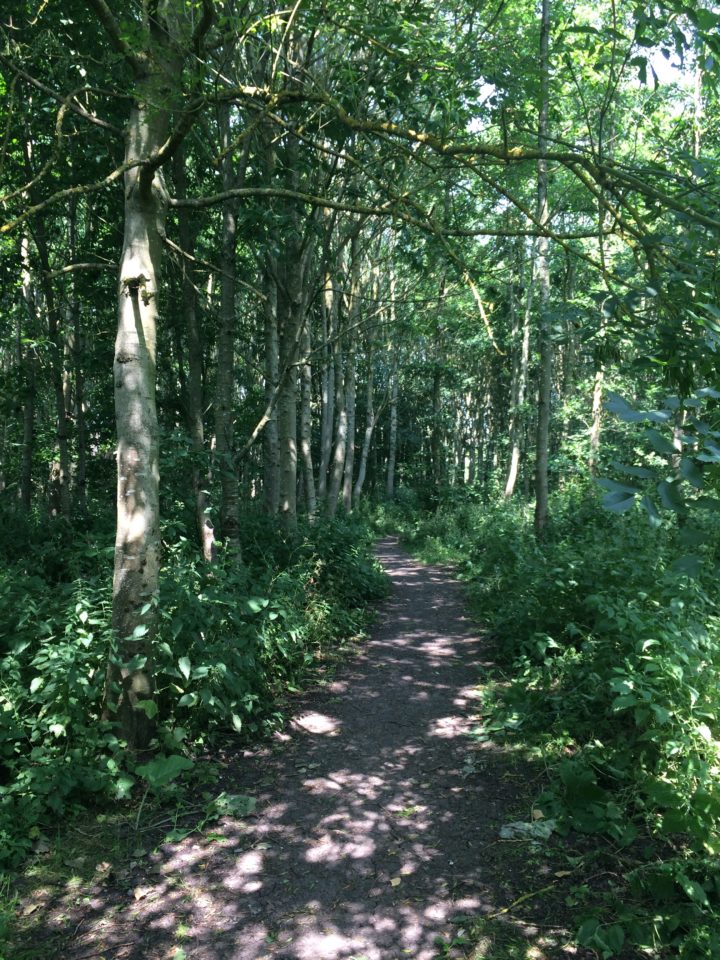 After the path junction, on your right is Cox’s Wood. This was newly planted in 1995 with native species of oak, alder, birch, hornbeam, field maple and cherry. It is now a particularly good habitat for nesting birds, voles and shrews.

At the end, a short flight of steps takes you onto the line of the old railway, now the Phoenix Trail (Sustrans Route 57).

This ancient way was once part of a main route to / from the Chilterns and has recently been revived as a link to Sustrans Cycle Route 57.

Turn right and proceed for approx. 200 metres admiring the view of the Chilterns to your left. Follow the path to the right through the barrier into Hackett’s Lane. Half way along Hackett’s Lane, take the path on the left into the school grounds. 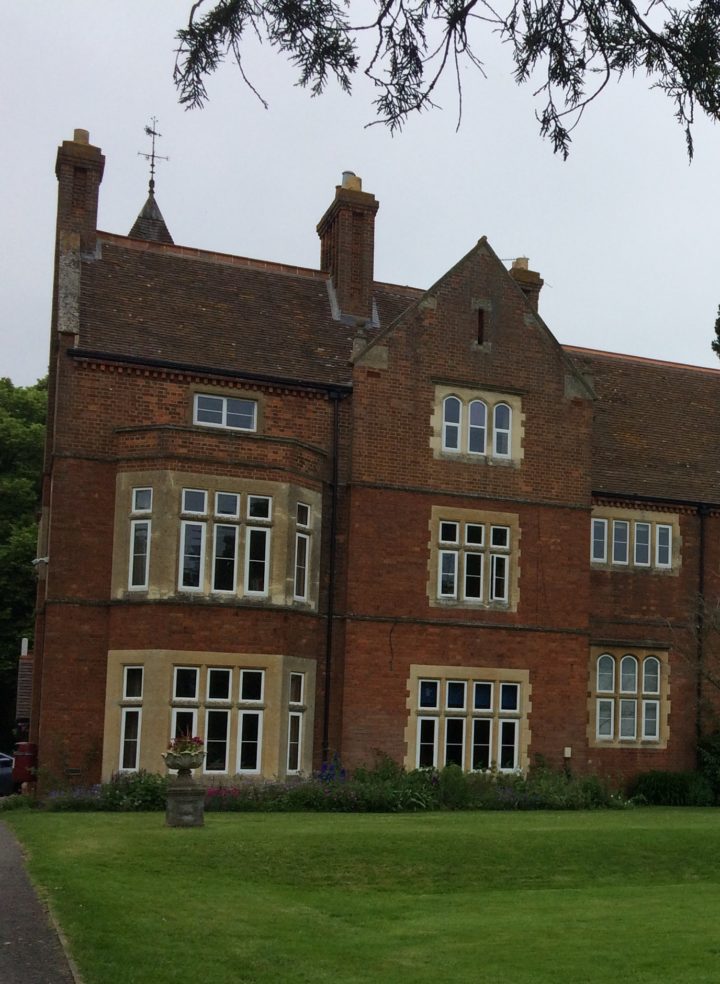 A short walk will bring you to the Thame Leisure Centre where refreshments may be obtained at the Café.

Facing away from the Leisure Centre take the path diagonally to your right, past the bike shelters and into the grounds of Lord Williams School. Pass through the hedge.

On the right is the new Lord Williams’s School built in 1879 to replace the building in Church Road. This popular school is now one of the largest in Oxfordshire with over 2000 pupils. The original building is still in use as the administration block which can best be seen from the Oxford Road

Follow the path through the car park, and emerge onto the busy Oxford Road and turn right towards the town. 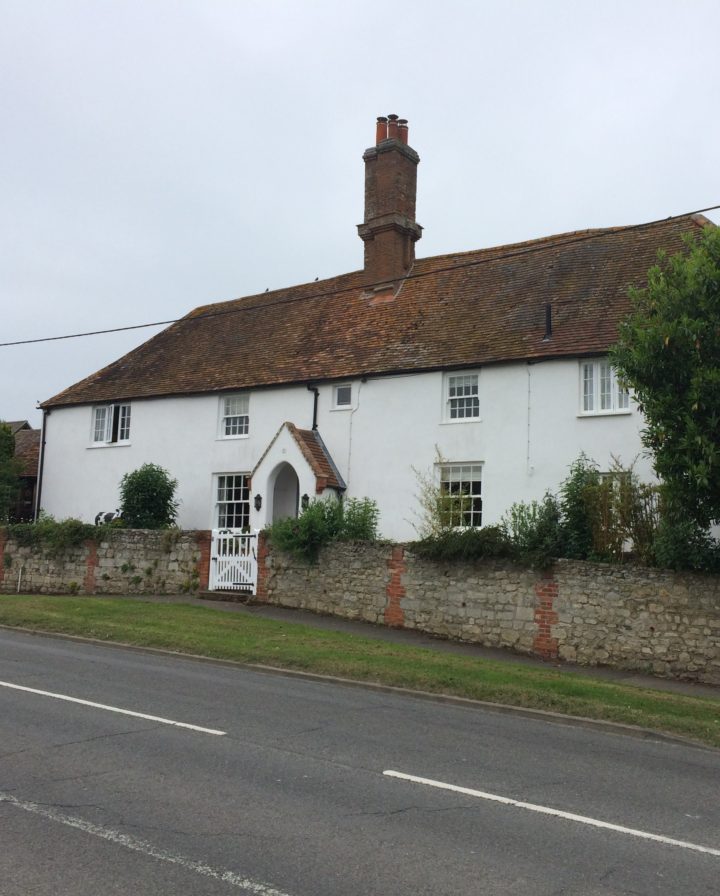 Town Farm farmhouse (No. 8) on the left has its origins as a 15th C open hall house with a central hearth; the large chimney stack was added in the 17th C to form a classic ‘lobby entry’ house.

Continue along Oxford Road to the bridge over Cuttlebrook.

The bridge replaced the ford that, whilst picturesque, was no longer practicable, although at times of flood this can still become a ford.

Cross the busy Oxford Road at this point.