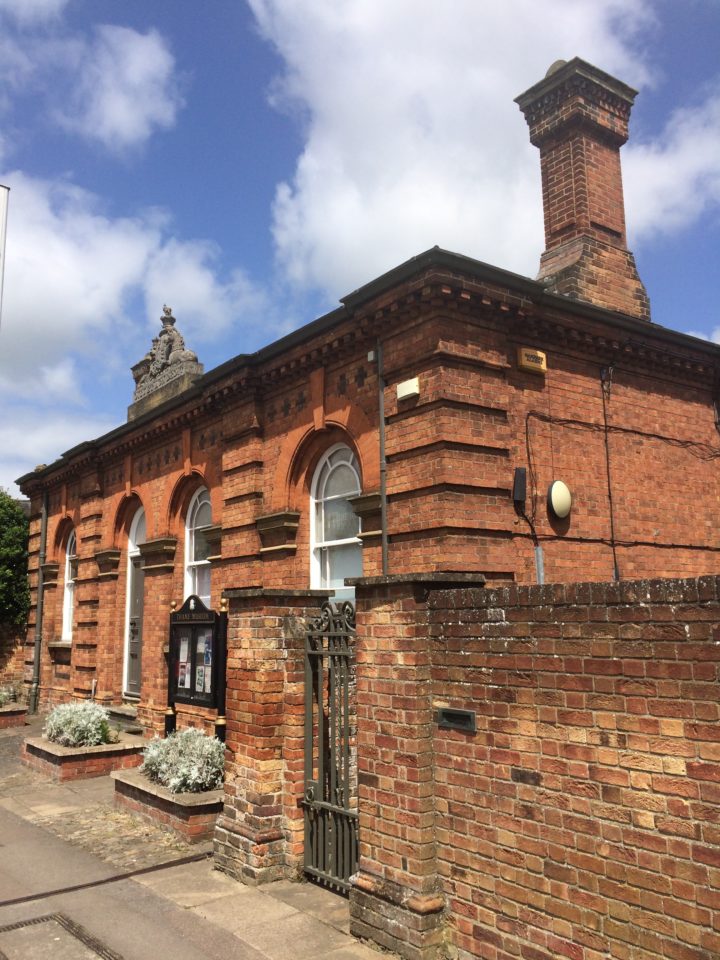 You will notice that the High Street narrows as the market area is left behind. Number 22, on the left – Lancastrian Cottage – is a reminder of what lies behind many of the grand façades in the town.

Across the road you can see the County Court. This was built from local brick in 1861 and altered to accommodate the Magistrates Court in 1984. It was purchased by the Town Council in 2005 to house the much acclaimed Thame Museum. This houses hundreds of items with everything from Elizabethan wall paintings to a Civil War soldier’s uniform on display.

The Royal Coat of Arms on the top of the building is the official coat of arms of the British monarch. On the left, the shield is supported by the English Lion On the right it is supported by the Unicorn of Scotland. The unicorn is chained because in mediaeval times a free unicorn was considered a very dangerous beast. 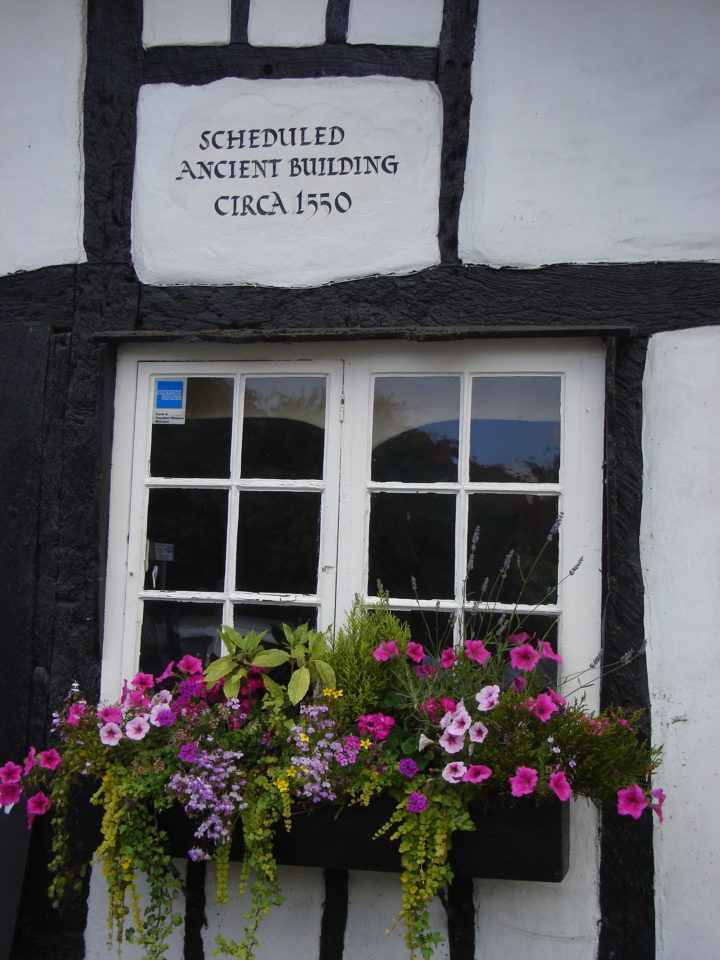 Beside you, The Thatch pub is made up from a charming group of cottages and was developed into a tea room many years ago. It became a popular restaurant and hotel, yet managed to preserve its 16th C origins and became more popular in 2007 as the prize in the TV programme “The Restaurant”.

Walk further along the High Street until you get to ‘The Cruke’.

This building is a beautiful timber framed house of box frame construction and dates from the 15th C. Note the medieval stained glass in the upper right window. The name is misleading as the cruck timbers are a remnant of a previous building.

Walk further along the High Street. 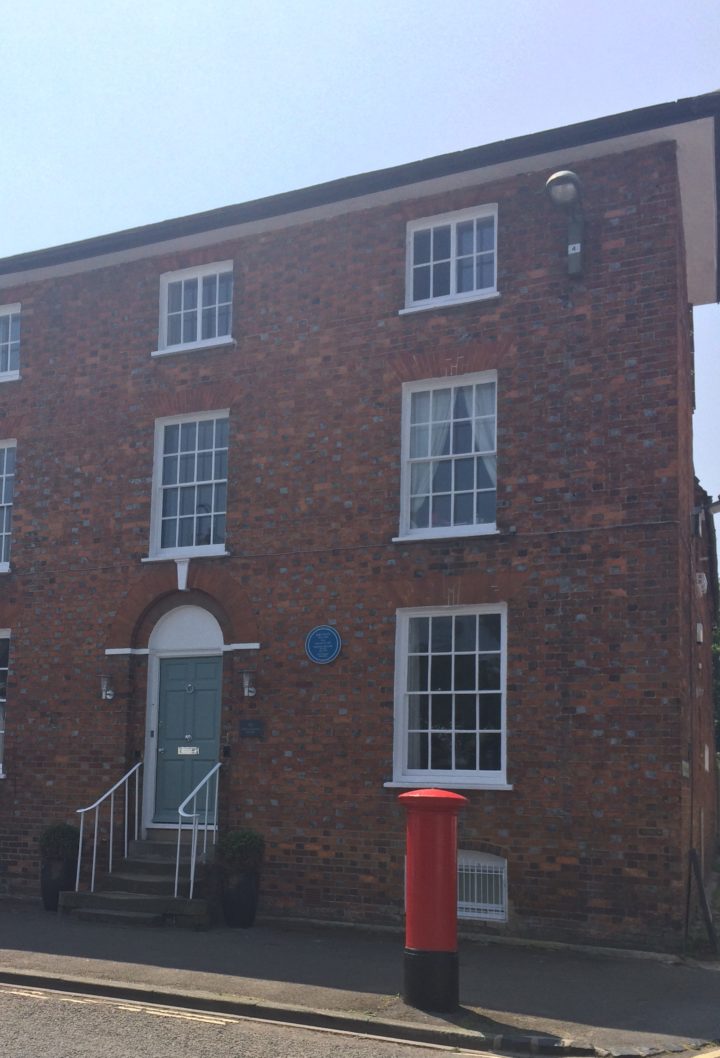 Before Brook Lane, Cuttle Brook House (Number 42) was the home of Irish poet W B Yeats where his son was born in 1921. The house is a good example of an 18th C town house. Despite its mock-Tudor exterior the Six Bells has a lovely 15th C timber frame structure.

Cross the High Street to the corner of Church Road.

Here the timber frame Alms Houses were a foundation of Richard Quatremain in 1447. Re-founded by Lord Williams in 1559, for five poor men and one poor woman, they are now privately owned and have turned their backs to Church Road. Opposite is an attractive row of 18th C cottages. Behind the Alms Houses the 19th C bandstand is a legacy of a grand ballroom. 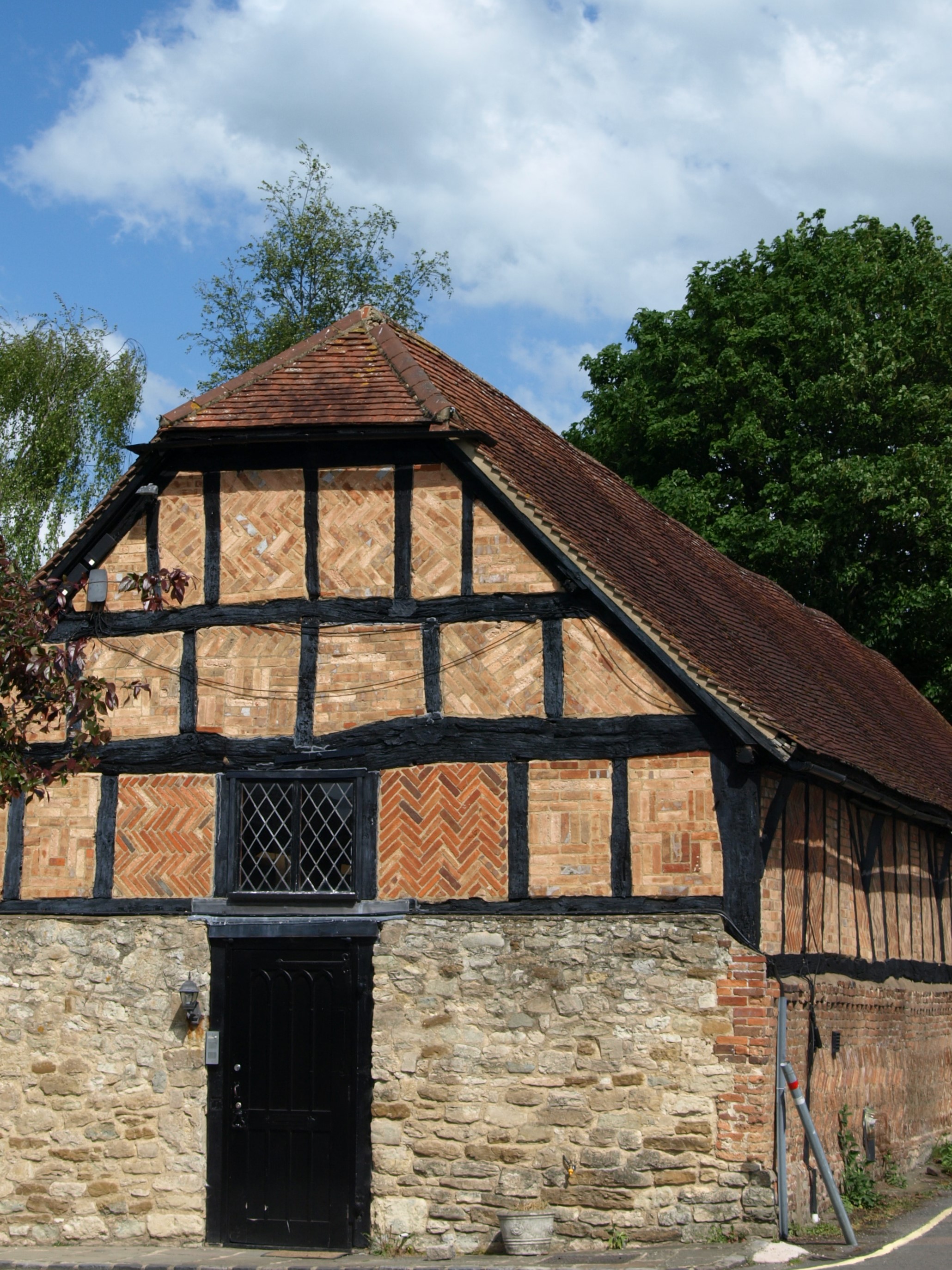 On your right the Grammar School, founded by Lord Williams, was opened in 1570. It had many notable pupils including John Hampden. The school moved to larger premises in the late 19th C. The building was used as the Girls’ Grammar School and then as a private house. The sympathetic conversion to an office complex won architectural awards in the 1980s.

The Tithe Barn on the left is a long low building where a brick base supports a timber frame with lovely herring-bone brick filling and was used for the storage of the church dues or tithes. Called Court Barn in the 15th C it belonged to the now demolished Court House, where the manorial Court was held.

Walk to the Church Yard. 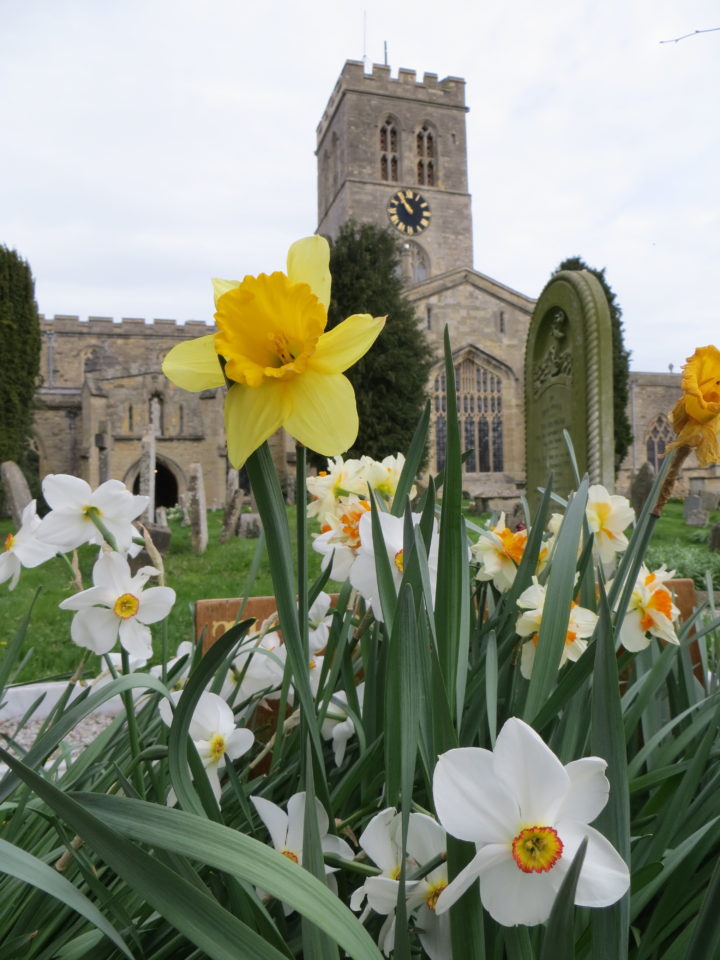 Go into the churchyard and turn along the avenue of limes on your right that was planted in 1887, passing the parish church of St Mary the Virgin dating back to the 13th C. It is a large cruciform church with many interesting items inside including the altar tomb of Lord Williams and the tombs and brasses of the Quatremain family

At the cross avenue, go straight ahead, down two steps and turn right. NOTE: To avoid the steps: return to the High Street, carry on to the western end, turn right into Priestend and follow the path around the church yard wall.

Prior to the planned town of New Thame the main traffic route from Aylesbury to Oxford followed this road and into Priestend. The Bishop of Lincoln obtained an order in 1215 to divert traffic through his market town of New Thame.

At the end of the path turn right, over the pedestrian crossing and again turn right. 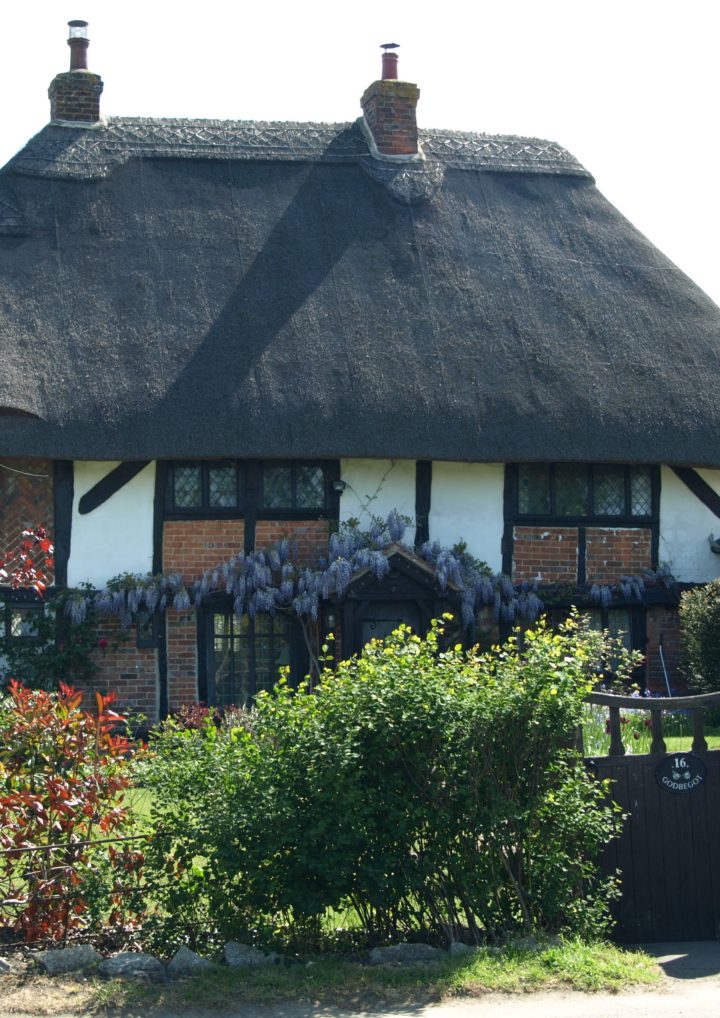 Gable Cottage, Godbegot and Regency Cottage form a lovely trio of ancient buildings set in an idyllic country scene opposite the cricket ground. Godbegot was much restored by the theatrical designer Herbert Norris in the 1930s. The cricket ground opposite is relatively recent having replaced the sheepfield in the 1960s

Continue along Aylesbury Road, go left at the roundabout into North Street and second left into Moorend Lane.

A little way down is one of the many timber frame houses of Old Thame. The Bishop’s Palace is a lovely blend of ancient structures; note the huge chimney stack. This was once the building used by the Bishop on his official visits.

Return to the corner of Moorend Lane. On your left, within the Car Park is the Cattle Market. 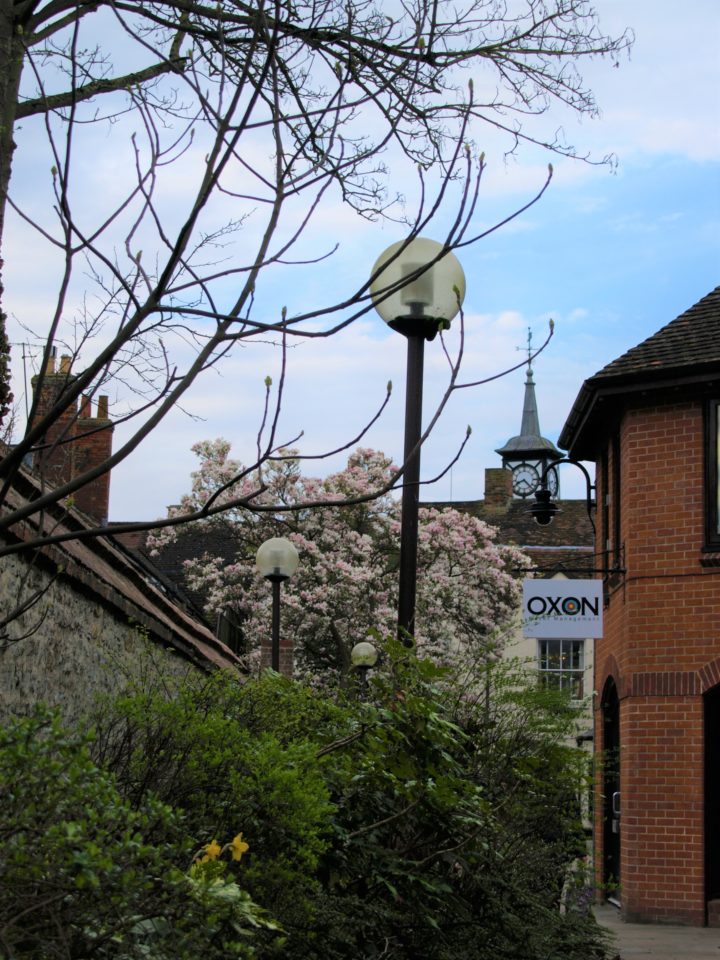 The Cattle Market moved here in 1951 replacing the market garden which had occupied the site since Place House was demolished in late 18th C. Place House had been the manor house of Old Thame from the time of the Stonor family in 1419.

Go over the pedestrian crossing and follow the path through Waitrose car park.

Greyhound Walk and parts of the car park have been built respecting the walls of the burgage plots. These long narrow plots are aligned with the earlier medieval field boundary and bend to present their buildings square to the street. This kink in the plot line is evident in the building line and paving at the entrance to Greyhound Walk.

Go through the passageway to return to the Town Hall where the trail ends.