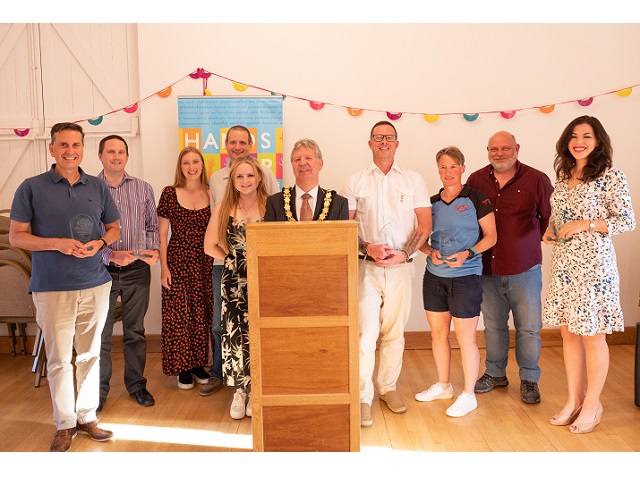 The awards ceremony was hosted by The Mayor of Thame, Councillor Paul Cowell, who welcomed this year’s winners and their guests, people who had nominated the winners, members of the Town Awards panel, councillors, Town Council staff, and sponsors. This year’s Town Awards were generously sponsored by Red Kite Radio, Helpful Hirings, and The HR Agency. The Mayor thanked everyone who had made a nomination this year. The list of everyone who received a nomination can be found on the ‘Thame Town Awards’ Facebook page.

The winners were announced as:

After the awards had been presented, some of the Ukrainian families came to surprise Neal Johnson with homemade gifts, flowers, and cards to thank him for all his support. Tetiana and her son then gave an emotional speech to everyone, thanking the community of Thame for making them feel so welcome.

Neal received this award in recognition of his huge efforts in coordinating Thame’s response to the Ukraine crisis by setting up a Facebook group to connect people and provide an invaluable support network. Neal is an inspiring, selfless volunteer who has been instrumental to creating a safe and welcoming community for Ukrainians in Thame.

Described as the beating heart of Thame Hockey Club, Clare has been integral to the club’s success through her mentoring of younger players, training, and umpiring as well as being a regular player. She also captains the Ladies 3XI who won the league this year.

Service with a Smile Award – The Black Horse Thame

Nominated by several of their customers, The Black Horse won this award for always giving their customers a friendly and professional service and going the extra mile. Their staff were described as hard-working, welcoming, and always smiling.

Roy gives his time to a range of organisations in Thame. From tending gardens at the Red Kite Family Centre, organising the long-standing coffee mornings for senior citizens at the Masonic Hall – which are much appreciated by their attendees – and giving computer and technology lessons at the library. He goes above and beyond to keep people together and cheerful, particularly through the pandemic. He is kind, positive, thoughtful, and unfailingly generous with his time and many talents.

Through his helpful nature and technical knowledge, Wayne has been key to helping Thame Players Theatre to develop and modernise its technical facilities. Through his excellent communication, he has shared his skills and knowledge to the benefit of local and visiting theatre productions.

Volunteer Group of the Year Award – Thame Round Table

Thame Round Table have been a long-time supporter of many events and activities in Thame. All of their members selflessly give their time to make a positive difference to our town. Come rain or shine their infamous annual Santa Sleigh and Duck Race bring “pure joy” to everyone, all whilst raising lots of money for local charities and causes.

Lucy Electric are committed to giving back to their community, and offer their employees paid leave to undertake volunteering. They have a close working relationship with 21st Century Thame and Thame Green Living on a range of environmental projects. They work closely with the young people of Thame, from promoting biodiversity and STEM subjects in school, to offering work experience placements and equipment donations to schools, and funding to Thame Youth Projects. Lucy Electric are supporters and sponsors of many town events, including Thame Carnival, Taste of Thame, Thame Swimathon, and Christmas celebrations. They are also a key member of the local business community, as regular attendees at the Business Breakfasts and Thame Business Forum.

View photos from the Awards Ceremony