Wow – what a wonderful weekend! 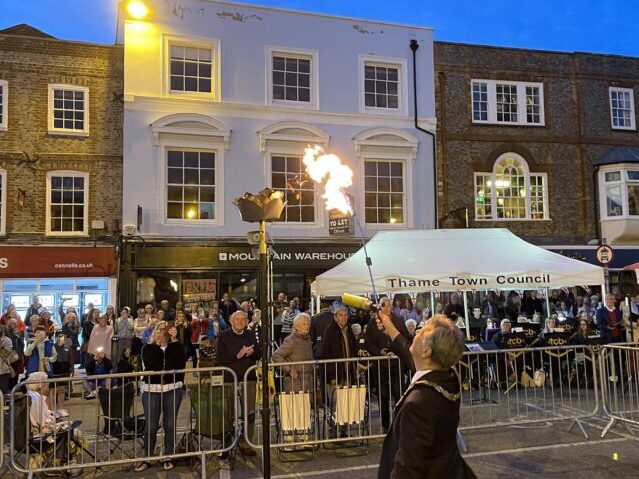 A massive thank you to all who came and supported the events over the long Bank Holiday weekend in honour of the Queen’s Platinum Jubilee!

To commence the Jubilee bank holiday celebrations in Thame on Thursday 2 June, the Town Council joined in with the nation’s recognition to honour the unique milestone of Her Majesty The Queen’s 70th year as our Monarch and Head of the Commonwealth, by lighting a beacon. The Mayor Cllr Paul Cowell welcomed the crowds that had gathered outside the Town Hall and a community blessing was given by Reverend Mike Reading thanking Her Majesty for her service. There was a unique performance from trumpeter Richard Vanryne who played ‘Diu Regnare’ accompanied by members of Thame Concert Band, who later had everyone dancing to ABBA. Thame Choral Society got the flags flying to Jerusalem. At 9.45pm the trumpeter played ‘Majesty’ to announce the beacon to be lit by the Mayor which coincided with Thame Choral Society singing ‘A Song for the Commonwealth’ to celebrate the special moments in the Queen’s life. The event concluded with an enthusiastic rendition of the National Anthem and thanks were given by the Mayor to all who attended and took part in the event. A great night was had by all, and you can watch the beacon being lit via the Town Council’s Facebook page.

Friday – Sports in the Street

It was a gloriously sunny evening, and the event was well attended by people from across Thame and surrounding villages. David Turner, Chair of South Oxfordshire District Council, Paul Cowell, Mayor of Thame and Susanna Pressel, Chair of Oxfordshire County Council opened the event and the sporting activities commenced after a rousing rendition of the National Anthem. There were many sports on offer and many clubs in attendance.  Thame Hockey Club wowed the crowd, giving many a first taste of their sport. Sandra Brooks Fitness took several energetic silent Zumba sessions and had the crowd literally dancing in the street. Host, Manoj Parmar, did an exciting ‘wipeout’ style warmup, and the children had a great time learning how to play cricket. Thame Tennis Club and Racquets Fitness Centre were there to represent the incredible array of racquet sports available and Thame Cycling Club also made an appearance, helping to make Sports in the Street 2022 a great success!

Whilst it rained on the parade, the sun came out in time for the fete on Southern Road Recreation Ground and the crowds turned out to enjoy the many stalls and varied entertainment on offer. Perhaps the highlight of the day was the arrival of the Lancaster Bomber which appeared at 3.15pm and flew incredibly low three times over Thame to the delight of everyone

Thankfully the rain held off for the fantastic Duck Race organised by Thame and District Round Table. A record-breaking £5300.00 was raised to be shared between local groups, so a massive thank you to all who attended and to everyone who bought tickets.