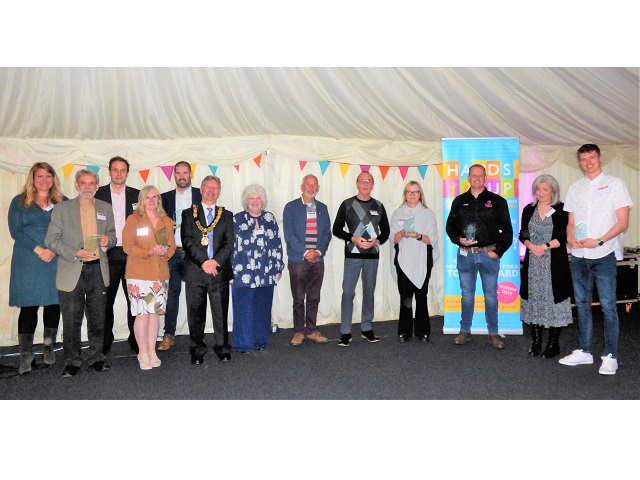 After a 2½ year break, the twelfth Thame Town Awards ceremony took place on 29 September 2021 at Chinnor Rugby Club marquee, who kindly offered the venue free of charge for this community event.

The Mayor of Thame, Cllr Paul Cowell welcomed this year’s winners and their guests, members of the Town Awards panel, councillors and Town Council staff. This year’s Town Awards were generously sponsored by Rhubarb Seating, Pentangle Technology, and Red Kite Radio, who all attended the awards ceremony. The Mayor thanked everyone who had made a nomination this year. The panel had a difficult time deciding the winners from so many outstanding nominations. The list of everyone who received a nomination can be found on the ‘Thame Town Awards’ Facebook page.

Before presenting the Town Awards, the Mayor Cllr Paul Cowell awarded the Mayor’s Special Award to Linda Newton in recognition of her long-term commitment to the young people of Thame through Thame Youth Projects and other community initiatives.

The first award of the evening went to Josh, who has shown incredible dedication and commitment to swimming despite the challenges of the pandemic and has competed at national level all whilst studying for his A-Levels. The closure of the swimming pools did not stop Josh – he swam tethered to a rope in a large paddling pool at home and continued with land and nutrition training. He then went on to compete with the Welsh Elite Squad and Olympic Squad, achieving personal bests in all his main events.

Chris started his coffee van business venture shortly before Covid came along, but quickly adapted and began visiting Thame’s residential streets on request to serve coffee to those working from home which really cheered them up. He continues to serve refreshments to local businesses. Chris received several nominations for his friendly smile that brightens people’s day.

Volunteer of the Year Award – Jude Brown and Joe Chapman

This year there were so many outstanding nominations in this category, that this year the panel chose two individuals to receive this award.

The first award went to Jude, an individual who has given so much time and care to Thame’s community. She is always willing to help those in need and expects nothing in return, from collecting prescriptions and shopping, and providing transport to appointments. Many families would be lost without her help and support.

The second award went to Joe Chapman, also known as Head Womble. Joe founded the Thame Wombles group and within a year has inspired hundreds of others in Thame to get involved with keeping Thame tidy. He received a large number of nominations in recognition of his tireless volunteering, despite personal challenges, and for genuinely wanting to make a positive difference to our town.

Lightfoots has been at the heart of Thame for over 150 years. They have created a ‘happy buzz’ in their offices by putting in place numerous initiatives to support the mental and physical wellbeing of their staff. They have supported the local business community by providing free legal advice to businesses who were reopening post-lockdown last year. Lightfoots are proud sponsors of several community events this year, including the Thame Art Crawl, Thame Food Festival, and Thame Arts & Literature Festival, as well as sponsors of the new pavilion at Thame Sports Club.

As Chairman of Thame Concert Band, Simon has helped the band go from strength to strength through his passion and dedication in all that he does. The pandemic presented challenges however Simon tackled these head on to keep both the band and committee running smoothly and enable a safe return to rehearsals. He has helped foster relationships in the community which led to the recent successful performance in Elms Park.

This group formed less than a year ago but already has over 400 members with 150 regularly active volunteers and have collected over 2,000 bags of litter in Thame. They report and clear fly-tipping areas and are making a noticeable difference to Thame through their impressive dedication. Graham Matthews (Deputy Head Womble), Jenny Walker (Keyboard Womble) and Michele Kotvics (Hedgerow Womble) collected the award on behalf of Thame Wombles.

For more information about the Town Awards, and to view images from the event please go to the Thame Town Awards Facebook Page or https://www.thametowncouncil.gov.uk/town-awards/.