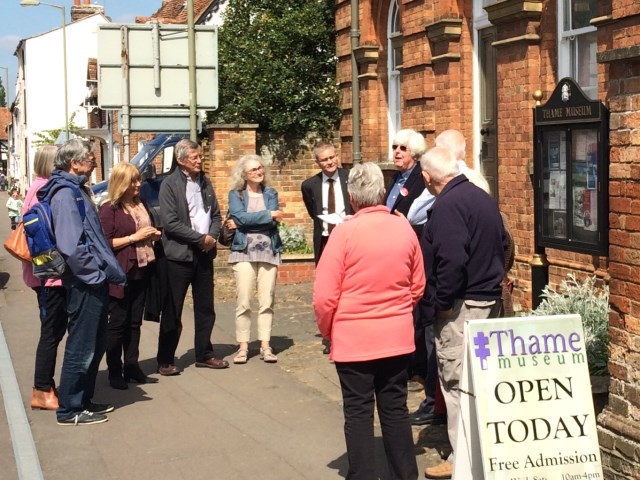 This month sees the return of the Midsomer guided walking tours of Thame for the first time since last year. Normally the tour season starts in April, but this hasn’t been possible this year because of the Coronavirus restrictions. The government has since given the tourism and hospitality industry permission to re-open, so Midsomer Tours will be recommencing from Wednesday 19 August every Wednesday until the season ends on 28 October.

Tony Long, tour organiser, commented ‘Following government advice, we are delighted that the ever-popular Midsomer Tours can start again. We will be ensuring that the now smaller tour groups comply with social distancing guidelines. Participants may wish to wear face masks, but none of the locations involves being indoors, so this is not necessary. Hand sanitiser can be provided on request’.

The Midsomer guided walking tour has become a great success since it launched in 2017. Knowledgeable tour guides take small groups on an hour-long tour around Midsomer filming locations in the town used in episodes of the popular ITV series Midsomer Murders. Thame is one of the most frequently used filming locations, with 22 locations in the town centre. Amongst landmarks featured are Thame Museum, Thame Town Hall, Market House, Rumsey’s Chocolaterie, the Spread Eagle and Swan Hotels, the Coffee House, and the Black Horse Pub & Brasserie.

Midsomer Murders is still going strong after more than 20 years. Tony adds, ‘Over 6 million people watch Midsomer Murders in the UK and millions more worldwide. It’s one of our biggest TV exports, and when people see it on TV, they want to come and visit the beautiful towns and villages of Midsomer, such as Thame. When they are here, they spend money in our restaurants, pubs, hotels, and shops – which has got to be good for the town and its economy, especially following the lockdown’.

‘We hope people will join the tours, because the more people there are taking part, the more funds we can donate to worthy causes at the end of the season. Last year we donated over £2,000. The guides themselves don’t take any income, and any funds left go towards next year’s promotion.’