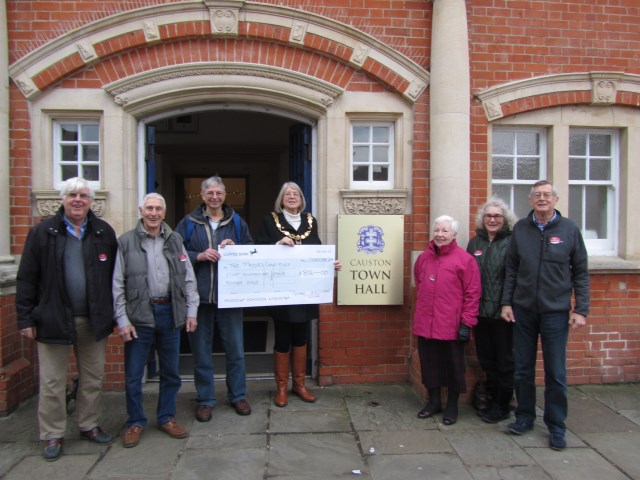 Thame’s Midsomer Walking Tours are supporting three good causes in Thame, with a contribution of over £1600 from their ticket income this year. The Mayor’s Charities, the Sharing Life Trust and Thame Youth Projects, will each receive a share of a cheque for £804, presented to the Mayor, Cllr Ann Midwinter, on Wednesday 12 December.

Thame Museum, a registered charity, will also receive £804 towards its upkeep and maintenance and two of its trustees, Cllrs David Dodds and David Bretherton, were also presented with a cheque on Wednesday 12 December.

Midsomer Tours of Thame donated part of their ticket income to the Mayor’s Charities and Thame Museum last year. But this year’s contribution is more than double last year’s.

Thame’s Midsomer Tours have enjoyed growing popularity since they started in May 2017. In 2018, bookings were taken from nearly 400 Midsomer fans who came from the local area and further afield in the UK, as well as from other countries, including Australia, Scandinavia, USA, and Germany.

The tours are run by six trained volunteers who are all members of Thame Players’ Theatre. Tickets are £7.50 per person and it was agreed at the outset that the tour guides themselves would receive no income, preferring to donate two thirds of receipts to the Mayor’s Charities and Thame Museum (a Midsomer filming location), while the remaining income would fund future promotion.

Thame’s buildings have frequently been used as filming locations for the popular ITV series Midsomer Murders. It has regularly featured, either as Causton, or as one of many villages in the fictional ‘Midsomer County’. The tours take in many of 20-plus filming locations in the town used in different episodes. Midsomer Murders is still going strong after 21 years, with screenings in the UK and overseas. Over 6 million people watch it in this country and millions more in over 100 countries worldwide. Having seen the show on TV, people want to come and visit the quintessentially English towns and villages of Midsomer.

Tony Long, coordinator for the Midsomer tour guides, said, ‘We’re delighted with the growing popularity of Thame’s Midsomer Tours, and are equally pleased to be donating even more of the proceeds to good causes such as the Mayor’s Charities and Thame Museum. Tony continued, ‘We’re looking forward to running the tours next year, on Wednesdays from Easter until the end of October. We believe the tours help develop tourism and contribute to the local economy, attracting visitors from the UK and abroad to the historic town of Thame.’