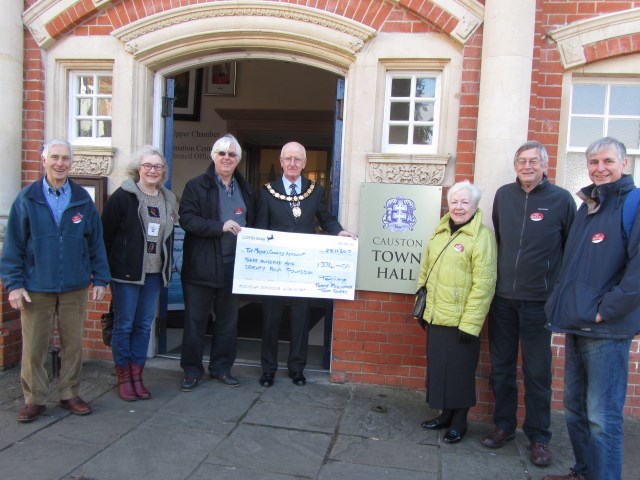 The Mayor’s Charities, the Red Kite Family Centre and Thame & District Day Centre, will be benefitting from Thame’s Midsomer Walking Tours. A cheque for £374, to be shared between the two charities, was presented by the Midsomer Tour Guides to the Mayor, Cllr Tom Wyse, on Tuesday 28th November.

The Midsomer Tours have been held weekly for the first time between May and October this year, run by six trained volunteers who are all members of Thame Players. The tours have been highly successful, with 200 people buying tickets, not only from the UK and local areas, but also from overseas countries, including Australia, Scandinavia, USA, and Germany.

The tours cost £7.50 per person and it was agreed at the outset that the tour guides themselves would receive no income, preferring to donate two thirds of receipts to the Mayor’s Charities and Thame Museum (a Midsomer filming location), while the remaining income would be used to fund promotion for the 2018 season.

Thame is one of the most frequently used filming locations for the popular ITV series Midsomer Murders and regularly features, either as Causton, or as one of the many villages in the fictional ‘Midsomer County’. The tours take in many of the filming locations in the town centre that have been used in various episodes. Midsomer Murders is still going strong after 20 years with regular screenings in the UK and all over the world. Over 6 million people watch Midsomer Murders in this country, and millions more in over 100 countries worldwide. Once they have seen it on TV, people want to come and visit the quintessentially English towns and villages of Midsomer.

Tony Long, coordinator for the Midsomer tour guides, said, ‘We are delighted with the success of the Midsomer Tours this year, and are equally delighted to be able to donate much of the proceeds to such worthy causes as the Mayor’s Charities and Thame Museum. Tony continued, ‘We are looking forward to running the tours again next year, every Wednesday from 4th April through to the last Wednesday in October. We believe these tours add a welcome new facet to tourism in the town, attracting more visitors to the historic town of Thame.’