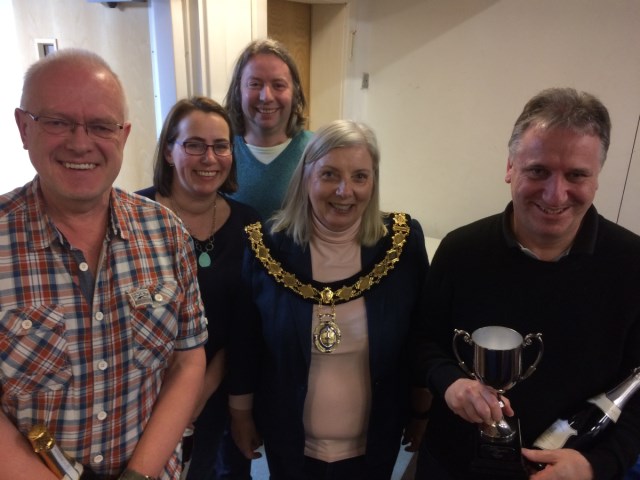 The Mayor hosted a hugely successful charity Quiz Night on Thursday 2 March, with an impressive £795 being raised for the Mayor’s chosen charities – the Red Kite Children’s Centre and Thame Youth Café. The quiz, which took place at Thame Leisure Centre, was attended by 16 quiz teams and hosted by the fantastic ‘Quiz Amigos’ – Peter Lambert, Sue Boyle and Brian West. The winning team was announced, after a tough tie-breaker question, as ‘Wild Geese’ (pictured, with the Mayor) with runners up ‘Simon and his Ladies’.

The Mayor also recently hosted a charity Snooker Competition at Thame Snooker Club raising £75. The finalists were Jack Kennedy, Craig Patterson, Sam Misseldine and Dave Felton. All four battled hard with some great cuing and superb safety but in the end experience prevailed and the two lower handicap players Sam Misseldine and Dave Felton advanced to the final which was best of 5 frames. Sam who has won the cup twice previously seemed to lose his form while Dave certainly found his, with some great potting and break building he finally took the title 3 frames to 0.

The Mayor has a final few charity events planned before the end of her Mayoral year in May, including a ‘Bubbles, Boards & Cream’ evening (9 March), Musical Evening (18 March), Golf Day (7 April) and Charity Dinner (29 April). Previous events have been very popular and have sold out far in advance so book your place now to avoid disappointment! Please go to https://www.thametowncouncil.gov.uk/the-mayor/ for more information or call the Town Council on 01844 260495.