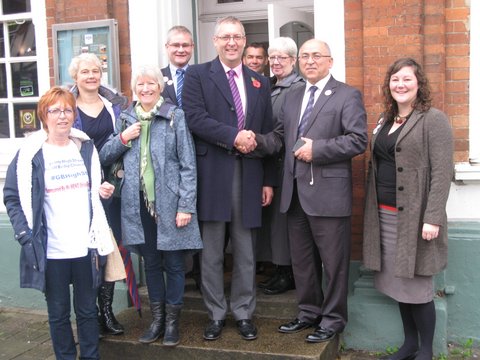 Thame played host to an expert panel of judges in the Great British High Street Competition on Friday 4 November as they were treated to a guided tour and a reception attended by some of Thame’s key businesses and supporters of the #GBHighSt entry.

The GBHS judges were given a guided tour of the town to find out what makes Thame’s High Street so special, followed by a reception where they met more than 50 people who have contributed to the development of the High Street.

Andy Torrance, a judge from Holland and Barrett, sponsors of the small market town category, spoke at the reception in the Stables at the James Figg Pub about why Thame is a great contender to win the #GBHighSt Award. Andy told guests how impressed he was with the community spirit driving the #GBHighSt competition entry, and the collective effort from the Thame bid team. He finished by encouraging the audience ‘to nurture this, and keep growing as I’m sure you’ll be extremely successful’.

Helen Johns and Sonja Francis of the Thame Town bid team were given special mention for their hard work on the project by Town Clerk Graham Hunt, before MP John Howell spoke of the importance of the project and of supporting local initiatives. The audience also heard from Thame Mayor Linda Emery and Jon Littler of the First Thursday Music Club, which uses the Stables as its regular venue.

Thame is in the FINAL THREE in its category to win fantastic prizes: a share of £100,000, expert training from Google’s digital task-force for shops, bars and restaurants, and a trip to Twitter’s London office for social media training. But the judges’ assessment counts for only 50% of the overall result – the other 50% is down to the public’s votes.

Currently Thame lags in third place in the small market towns category, behind competitors Chipping Norton (1st place) and Hebden Bridge (2nd).  So the Thame bid team are asking the public to vote every single day – not just once, until 18th November, when voting closes. If you have more than one email address, you can also vote once per day per email address. By voting daily, everyone who cares about Thame can help the town to have a chance of winning great prizes, which will benefit the town, its prosperity and well-being, and the community.