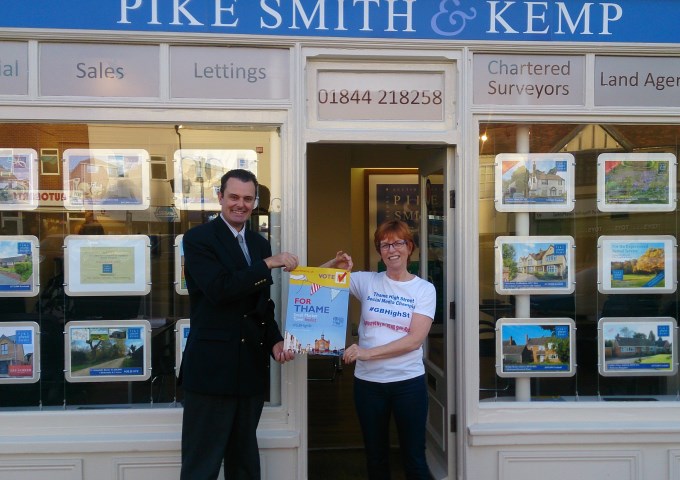 Thame is on full alert this morning as a crack team of expert judges find out what makes its High Street so special and a contender to win the Great British High Street Competition 2016.

A judge from Holland & Barrett, sponsors of the small market town category, has a 50% say on who wins the title of best small market town high street in Britain. The other 50% is taken up by public voting – already over 100,000 votes have been cast.

The winners will get a share of a prize pot worth £100,000 and expert training from Google’s digital taskforce for shops, bars and restaurants, as well as a trip to Twitter UK’s London office to boost their social media skills.

“Now we’ve heard, not just that Thame is a finalist, but that Thame’s Chris Hurdman is a finalist in the high street heroes market trader category. So we’re pulling out all the stops to wow the judges – Chris has even taken to writing poetry to describe our beautiful town.

“We’re asking every resident, every business and every shop to vote for Thame and for Chris once every day until the voting period ends on 18tth November. We will be rooting for a double victory, confirming Thame as a vibrant destination, from its historic foundations to its ambitious vision for the future.”

The public can vote directly for their best-loved high street online. Between now and 18 November you can cast your vote for Thame for free via vote4thame.uk and for Chris via vote4chris.uk.

“We are proud to be supporting this celebration of the greatest that the British high street has to offer. Looking at the finalists, it’s going to be a tough competition, but I’m excited to see examples of the innovation and community spirit that make our British high streets the institutions they are today.”

The Great British High Street Competition 2016 celebrates the great work that is being done to revive, adapt and diversify the nation’s high streets. It is one of a number of initiatives to help champion high streets as the cornerstones of the community.

This year’s competition saw a record 900 entries across all 14 categories, including the new categories for individuals and shops.

The twenty-seven finalists in the 9 categories for places were announced on 18 October. In the small market town category, Thame is competing against county rival Chipping Norton and Hebden Bridge in Calderdale.