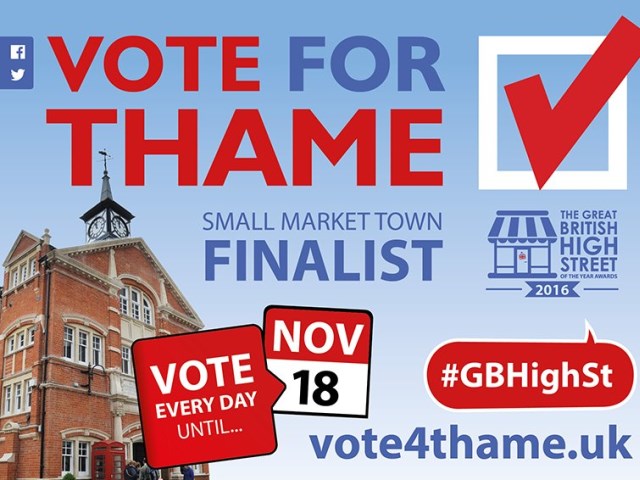 Over a week into the public voting period, a rankings release by the Great British High Street Competition has revealed that in the small market town category, Thame is trailing in third place.

But with three weeks to go until voting closes, that could all change.

With the public vote making up 50% of final decision, the team behind Thame’s entry are urging local people to get behind their bid for glory.

“Over 100,000 votes have been cast in the competition so far, proving that people are passionate about their high streets up and down the country.

“Thame did fantastically well to make it into the final three, but now every vote counts and they need an extra push to get them title of Britain’s best high street.”

The Great British High Street Competition 2016 celebrates the great work that is being done to revive, adapt and diversify the nation’s high streets. It is one of a number of initiatives to help champion high streets as the cornerstones of the community.

This year’s competition saw a record 900 entries across all 14 categories, including the new categories for individuals and shops.

The twenty-seven finalists across the 9 categories for places were announced on 18 October. In the small market town category, Hebden Bridge in Calderdale is competing against Thame and Chipping Norton, both in Oxfordshire.

Winners in each category will get a share of a prize pot worth £100,000 and expert training from Google’s digital taskforce for shops, bars and restaurants, as well as a trip to Twitter UK’s London office to boost their social media skills.

Alongside the public’s votes shortlisted small market town high streets will also be inspected by judges from Holland and Barrett International, an industry leader in retail, and Europe’s leading retailer of Vitamins, Minerals and Herbal Supplements. The judges have a 50% say on who wins the competition.

Holland & Barrett stores are a familiar sight in almost every major city and town across the United Kingdom and Ireland, where they operate over 700 outlets with over 7,000 employees.

Between now and 18 November you can cast your vote for free via thegreatbritishhighstreet.co.uk and follow @TheGBHighSt on Twitter.

You can also visit our website page here for all the information on Thame’s entry.