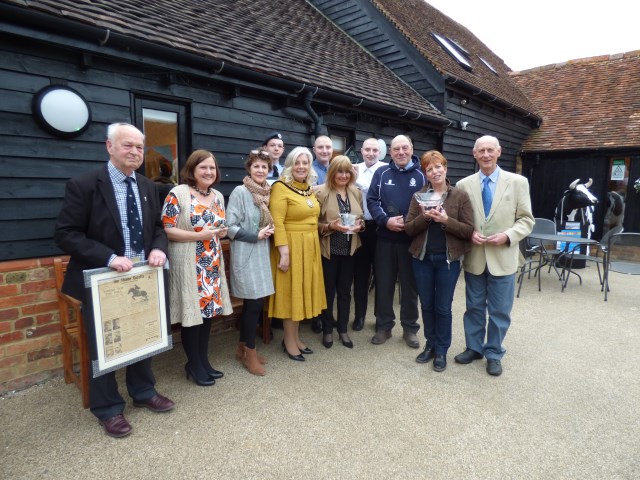 Yesterday evening, the ninth Thame Town Awards took place at The Barns Centre with over 40 guests in attendance including the winners and their guests, members of the Town Awards panel, the Mayor of Thame, councillors and Town Council staff.

The Mayor welcomed those in attendance, and thanked those who took the time to make a nomination this year and the Town Awards panels who had the difficult task of choosing the winners. This year’s sponsors were Risborough Carers who will be celebrating their 25th birthday in 2017 but were unfortunately unable to attend. The Mayor thanked them for their kind support of the event.

Helen Johns and Sonja Francis, members of 21st Century Thame, gave a presentation about their involvement and success in the recent Great British High Street competitions, Revive & Thrive Awards, Midsomer Murders and their promotion of Thame. The Mayor thanked Helen and Sonja for working tirelessly and generously giving their time to promote Thame, and presented them with a glass bowl each as a thank you from the Town Council.

The Mayor then presented Councillor David Dodds with a framed article of The Thame Gazette from the year he was elected as a Councillor, as well as a luxury two night stay at The Billesley Hotel, as a thank you for his 50 years’ service to the Town Council.

The Town Awards ceremony began with the presentation of the Creative Arts Achievement award which went to Catherine Enticknap for her successful Interchurch Productions, of which she is director, and for motivating people of all ages to act, sing, dance and perform, with many going to be professionals. Catherine was very thankful for her award, and added that the award was for her team.

The Sporting Achievement award went to the head coach of Thame Swimming, Ian Blyth. He received the award for his his passion and enthusiasm for the club and relentless energy for inspiring the best in each and every swimmer.

Service with a Smile went to Jason & Joshua Atalay, who had been nominated for their top-class and friendly service, and were described as beacons of positivity and always smiling.

Sue Boyle received the Volunteer of the Year of the award for raising thousands of pounds for charity through her popular and enjoyable quiz nights, to which she gives her time “freely, enthusiastically and with a wonderful sense of humour”. Sue was also nominated for her involvement in various community events and was described as “a true pillar of our community”. Sue was very grateful for the award and added that this year is the 25th year of doing quizzes!

The final Town Award to be given out was the Lifetime Achievement award, which went to Angus Lachlan for his 25 years’ service to Thame Town Cricket Club including a variety of volunteer roles and 10 years as Chairman.

The Mayor then presented her Cadet, Oscar Earls, with a certificate, and thanked him, adding that it was his first public service. Guests then enjoyed a buffet and photographs with the Mayor.

To view images from the event, please go to the ‘Thame Town Awards’ Facebook page.

Next year will be the 10th town awards and we are looking forward to celebrating in style! Watch this space…