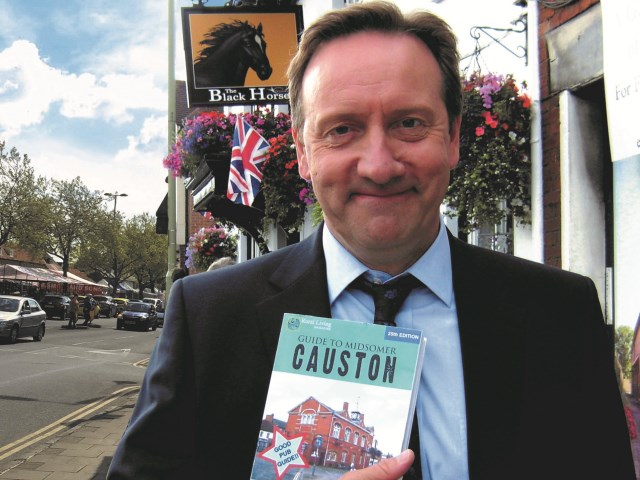 Thame regularly features, either as Causton, or as any one of the many villages in the fictional ‘Midsomer County’. Midsomer Murders is still going strong after 20 years with regular screenings, not only in the UK, but all over the world. Sarah Osborne of Tourism Angles, specialists in Midsomer tourism, says, ‘6.5 million people watch Midsomer Murders in the UK and millions more in over 100 countries worldwide. The series is one of the UK’s biggest TV exports – rating in Denmark’s top 3 and Australia’s top 20. People see it on TV and want to come and visit the beautiful towns and villages of Midsomer.’

Many Thame landmarks have been featured in different episodes over time, including Thame Town Hall, the Market House, Rumsey’s Chocolaterie, the historic Swan, Black Horse, and Spread Eagle hotels, plus other locations. Thame’s cricket ground and Prebendal House were recently featured in filming for future episodes.

Tony Long, coordinator for the new tour guides – who are all volunteers, said, ‘The tours have been in development for several months, and follow on from the original tour which was created by David Dodds of Thame Museum. The tours are being held under the auspices of 21st Century Thame, an organisation that brings together local businesses, community groups and councils to help keep Thame vibrant and viable as a market town. They were taken up after a successful 21st Century Thame Midsomer Workshop held in Thame last year, which recommended a number of promotional ideas to develop Midsomer tourism in the town, including regular Midsomer tours.

Tony continued, ‘The tours take place weekly between May and October, alternating between Saturdays at 2.30pm and Wednesdays at 11.00am, and start from inside Thame Museum (79 High Street, Thame, OX9 3AE), one of the filming locations, taking in many locations in the town centre. We hope these tours will add a new facet to tourism in the town, attracting more visitors from the UK and overseas to the historic town of Thame.’

Tickets cost £7.50 each and may be purchased online at www.ticketsource.co.uk/thamemidsomer. Alternatively, you can simply turn up on the day and pay the guide.

Part of the proceeds from Midsomer tours goes to Thame Museum and other charitable causes.