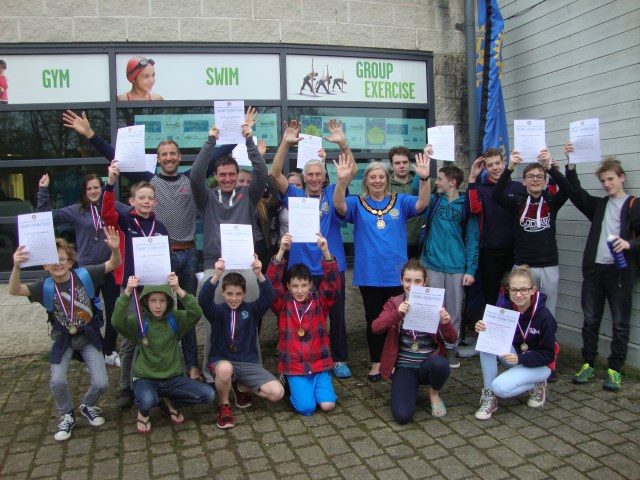 20 teams attended the 5th edition of the Thame Swimathon at Thame Leisure Centre on Sunday 26 February, a fun and fund raising event organised by the Rotary Club of Thame. Thame Rotarians received great help from members and families of Thame and District Lions Club and Thame Inner Wheel Club.

Ben Williams and Marcus Birmingham who earlier in the week received South Oxfordshire awards for sports achievements were part of the “Thame Swimming Club Team A” established a new Thame Swimathon record. Team A swam 221 lengths beating 2014’s record of 180 held by another Thame Swimming Club team. Elliot Riley-Brown, another SODC award winner was a member of “Team F” which swam 187 lengths, the second best ever performance. At this year’s Swimathon, Thame Swimming Club participated with 9 teams.

Marius Ciortan, Rotary Club of Thame’s spokesman, said: “The 5th edition of Thame Swimathon was very successful. We send our thanks to all swimmers who enthusiastically covered 2,899 lengths and raised lots of money for good causes. A big “thank you” to our families and friends from Rotary, Lions, and Inner Wheel clubs. We are also grateful to our sponsors, Aston Hearing, Booker Tate, Park Street Dental Clinic, Thame Leisure Centre and Ignite Sport who helped us covering most of the costs required to run our community event.”

The amount raised by the teams so far exceeds £4,000. Team Ice Cream, a group of Thame school children, who swam in memory of Barnaby Cork are currently the leaders on the fundraisers’ table. The public has got time till 2nd April to support the teams with their fundraising. The links to My Donate can be found via www.thame.rotary1090.org

More photos taken at Thame Swimathon can be found on www.facebook.com/thamerotary