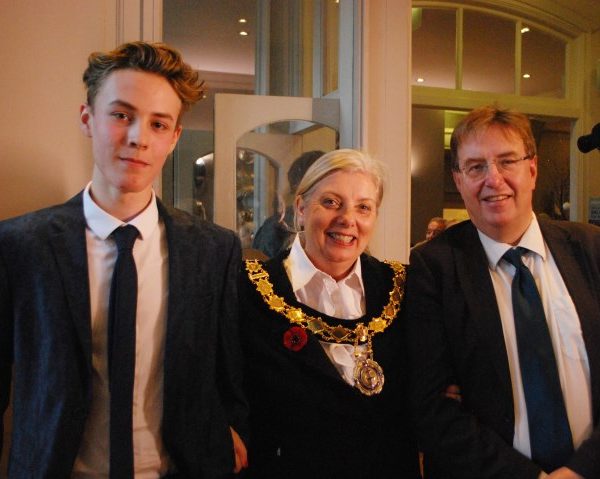 Samantha Bond, the Downton Abbey actress, came to Thame to judge and present the prizes for the best window displays in the Small Business Saturday Christmas window display competition. From 18 entries submitted, Samantha and Keith Slater, a retail expert, chose three winners. Announced by the Mayor of Thame, Cllr Linda Emery, the first prize of a trophy and case of prosecco went to Deli No 5 on Buttermarket, the second prize of a bottle of prosecco to Bizzie Lizzie on Upper High Street, and the third prize of a bottle of prosecco to Shaw Trust, High Street.

Five finalists in the SBS Young Entrepreneurs Competition pitched their business ideas, Dragon’s Den style, to a panel of expert judges chaired by Tim Luscombe of Thames Valley Business Advisers.  Three winners were later announced at a packed reception in The Spread Eagle Hotel. The winners’ event began with a performance by talented young singers from Stagecoach Thame. The prizes, sponsored by CarmichaelUK, included a first prize of £500, a trophy, and business mentoring for 12 months which went to Thomas Wylam of Princes Risborough School (pictured above) for his idea CupCycle, based on recycling plastic coffee cups. The second prize went to Amelie Mason of Lord Williams’s School, for her idea Magical Maths, based on a new maths app, and the third prize went to Philippe van Caloen of Oxford Brookes University for his idea WeCoach, aimed at helping students apply for their first job. Present were John Howell MP, the Mayor of Thame, Cllr Linda Emery, and invited guests.

Small business owners flocked to Christchurch on Upper High Street to attend nine free-to-attend workshops and one2one sessions given by business experts on subjects ranging from understanding business finance to digital marketing and how to get the right customers for your business. They were also entertained by performances from Thame Pop Choir and a Stagecoach Thame dance troupe. Small businesses were also invited to place their business cards in a prize draw to win fabulous prizes, including a cookery class at the home of Katie Ryder-Richardson, celebrated local chef and caterer, a meal for two at the Thatch, and vouchers to spend at the Book House, 2Wheels, Racquets Fitness Centre, the Cutting Rooms, Jack & Alice and others.

Big wins all round!

The Small Business Saturday organising team are grateful for the support of sponsors, including several local companies, Thame Town Council, and South Oxfordshire District Council, for making this highly successful event possible. They are also grateful to Thame TV for videoing the whole day.